A long hard paddle to Bute. 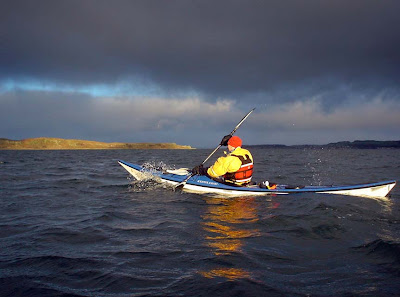 It seems like ages since we have been out on the water, then last week's blue skies and light winds were so tempting. Unfortunately, a very busy week at work meant no possibility of taking a day off. The weather forecast for yesterday was "Wind: northwest 4 or 5 backing west 5 or 6, occasionally 7 later."

We were so desperate we decided to go anyway. We thought we could paddle out in the lee of some islands in the Clyde and so decided to head out to Bute, hopping there in the wind shadow of Little Cumbrae. Driving north past our usual launch site, the sandy bay at West Kilbride, there were white horses all the way to the horizon. We decided to continue to Tony's secret launch spot at the Hunterston nuclear power stations. This was nearer the Little Cumbrae and in its wind shadow. 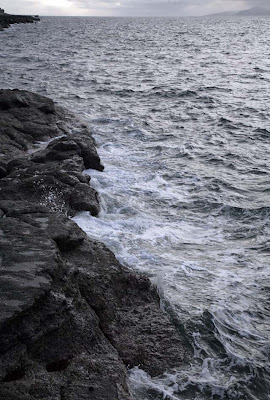 There is no beach you just carry your boat down greasy rock ledges and away you go. Another slight drawback for those of a nervous disposition is the speedy arrival of the police to check you out. They seemed satisfied we were not terrorists and that our gear did not contain explosives. Mind you they did not find our parachute flares. Neither power station is producing electricity at the moment but the windmills on the hills above were birling round in the breeze. Further up the coast, the huge stack of the Inverkip oil powered power station has been smokeless for years. 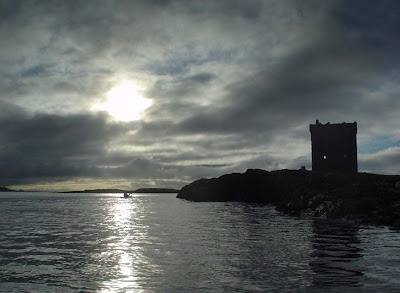 The weather was characterised by great squalls passing through and in them, the west wind was 5 to 6 and the nearby Prestwick Airport METAR data showed gusts up to 30 mph. However, we got occasional blinks of sun when the wind dropped and it became quite pleasant. Once we were in the lee of the walls of the Little Cumbrae castle we could relax and enjoy the scenery. The castle was built in 1527 and is one of the best preserved keeps in Scotland. It has a renovated stair well and roof. The new owner of Little Cumbrae has a welcoming attitude and has painted out the former Keep Off signs. We enjoyed a great view from the top of the castle. 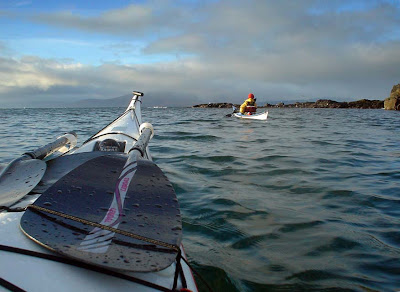 Still in the lee of the land, we approached Gull Point, the southern tip of Little Cumbrae. The basalt cliffs stand well back from the present shore line above a raised beach. Ahead lay the wind line and white horses. Rounding the point was quite bumpy then it was nearly straight into a force 5-6 wind for over 4 kilometers to Glencallum Bay on Bute. 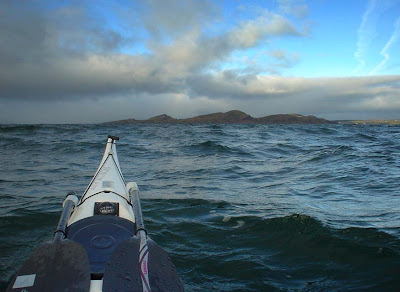 The wind only eased for a few minutes between squalls. This was about half way across. Garroch Head on Bute is on the horizon. I was so out of condition and tired that if it had been just 100m more, I doubt if I would have made it. The worst bit was the last kilometer. Although the water flattened the wind increased as it accelerated down of the hills of Bute. 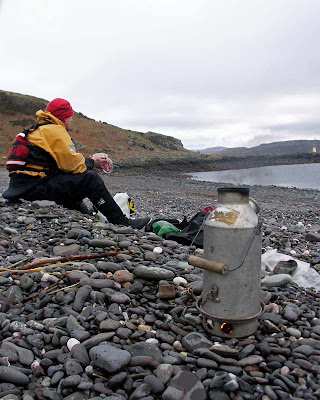 We had a very leisurely lunch and I got the Kelly Kettle on for a nice cup of tea. We then enjoyed a real blast down wind, at speeds of up to 12 km/hour, this time passing the north end of Little Cumbrae. There were lots of eider duck, guillemots and black guillemots we also saw several grey seals and a couple of youngsters who had moulted out of their white juvenile coats. The landing at Hunterston was rocky and damaging to gel coat. Tony wished he still had his poly Cappella! A great day out, given the forecast, neither of us would have gone on our own.
Posted by Douglas Wilcox at 1:17 pm 3 comments: