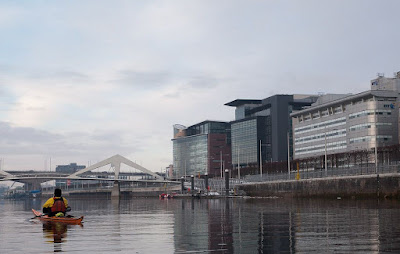 Below the King George the Fifth bridge, the north side of the Clyde is bounded by Broomielaw quay. This was the main Glasgow terminal for passenger ships and it was from here that the World's first commercial paddle steam ship started in 1812. In later years generations of Glaswegians took their holidays "doon the water" by taking a steamer from the Broomielaw to the Clyde resorts. Now it is the home of Glasgow's International Financial Services District. 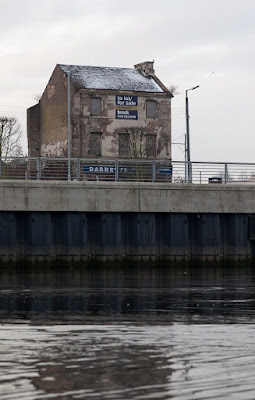 On the south bank, the Tradeston district has not fared so well. This sad old three storey Georgian villa at One Tradeston Street is the only survivor of a long terrace. 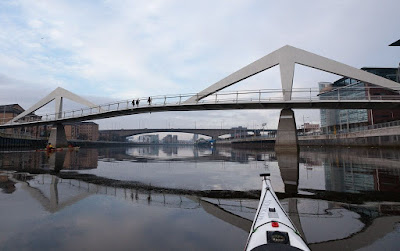 The Tradeston pedestrian  bridge was opened in 2009 with the idea of injecting some life into the area. According to Glasgow City Council, "It links the successful International Financial Services District (IFSD) with newly developing Tradeston area on the south bank and was built along with a new riverside public realm project on both banks to provide a new destination on the river". So there!

It is a steel cantilever bridge and was engineered by Halcrow. 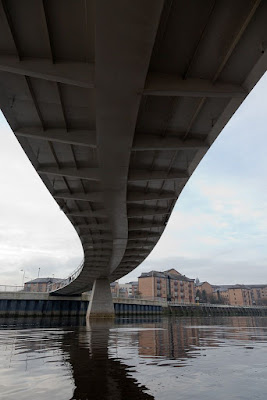 Of course us Weegies don't call it the Tradeston bridge. Oh no, it's the Squiggly Bridge. Apparently the gentle double curve allows enough rise in the centre of the bridge for barges to pass below, without the need for steps, that the locals might trip over. It's just as well Weegies are famous for not being able to walk in a straight line. 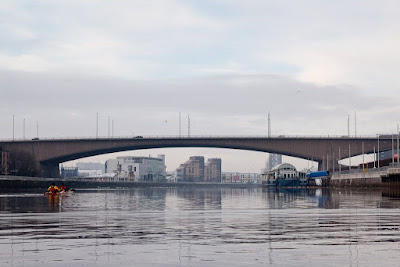 Further downstream  we came to the 1970 Kingston Bridge, which carries 10 lanes of the M8 motorway, right into the heart of Glasgow. The design, which I believe is called brutal modernism, was implemented by W A Fairhurst & Partners  and is a cantilevered prestressed concrete construction. The span is 18m above the river because when it was built, the Clyde was still dredged up to the King George the Fifth bridge. Indeed, I remember redundant oil tankers being berthed upstream of the bridge in the 1970's oil crisis.

By 1990 the supporting piers were collapsing into the Clyde and, by the end of the millennium, a major engineering project was required to repair the bridge.  The deck was lifted by 20mm on huge hydraulic jacks to allow the construction of new piers without interrupting the traffic. I know the bridge quite well, I have crossed it about 12,000 times, but I hadn't seen it from this angle before. 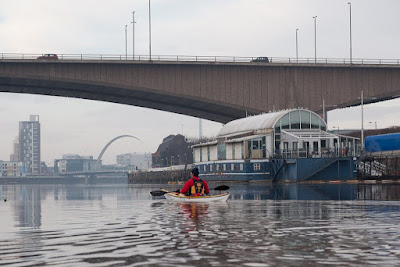 Berthed below the Kingston Bridge is the sad remains of the old Renfrew Ferry which crossed the Clyde 8km downstream from here. It's now an entertainment venue where local bands play... 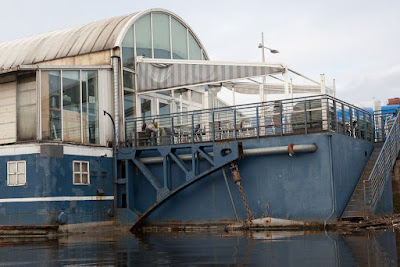 ...but it used to rock to the clanking of chains by which it dragged itself across the strong currents in the Clyde. It made its last crossing in 1984.
Posted by Douglas Wilcox at 11:49 pm 1 comment: