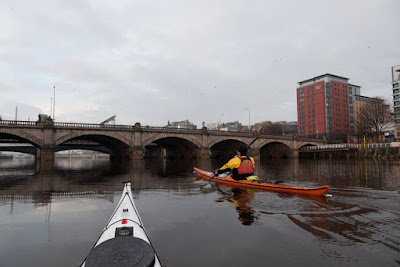 Downstream of the suspension bridge we approached the Glasgow Bridge (or Jamaica Bridge because it is at the bottom of Jamaica Street). It was built in 1899 by Blyth and Westland. 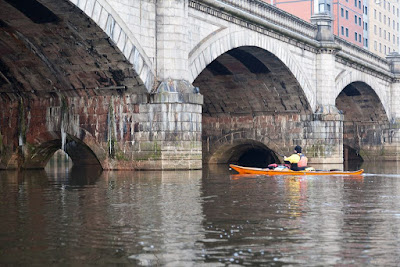 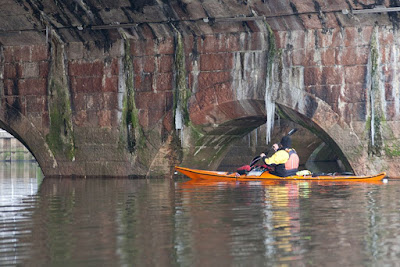 There were unexpected arches through the piers... 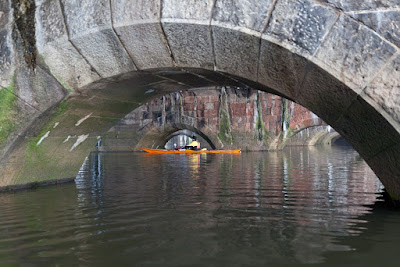 ...it was a stunning location, looking across the river through these many arches within arches. 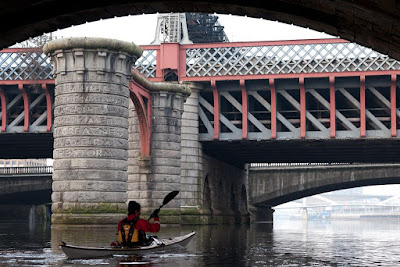 There are inscriptions in Greek and English on the side of the redundant pillars that face upstream. The English text reads "All Greatness Stands Firm in The Storm". It looked as if it had been inscribed by the builders of the bridge as a Neoclassical Victorian statement of confidence in Glasgow's future.

However, there is a very interesting story behind these inscriptions, they are surprisingly recent. They were carved in 1990 to a design by artist Ian Hamilton Finlay who won a commission from the New Works for Different Places; Four Cities Project organised by Television South West Arts. Finlay explicitly omitted any plaque with his name or any explanation, or even suggestion, that it was an art work. He also intended that it could only be viewed from the river.

We certainly appreciated this surprising discovery on these now apparently purposeless pillars. 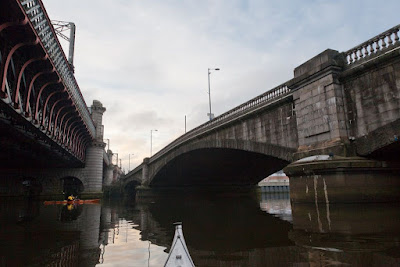 Next we paddled under the second Caledonian Railway Bridge which was built in 1905 and carried nine rail tracks into Central Station. It was engineered by Mathieson and Barry using steel lattice girders supported by granite piers.

Immediately downstream of the railway bridges, we came to the George the Fifth Bridge. This was built in 1928 by Considere Construction using reinforced concrete box girder construction, which was faced with decorative granite masonry. For many years the George the Fifth Bridge was the lowest crossing point on the River Clyde. It was not until 1970 that the completion of the Kingston Bridge removed that honour from this fine bridge. The Kingston Bridge proved to be the start of a second phase of bridge construction on the Clyde and we were about to discover whether these new bridges  could match the interest of the old....
Posted by Douglas Wilcox at 8:47 am 2 comments: