Tragedy in the Sound of Islay

The BBC Scotland News has just reported a tragic accident in the Sound of Islay. Yesterday (Saturday) afternoon, a sea angler was swept away by strong spring tide currents in the Sound of Islay. The RNLI Lifeboat from Port Askaig and a helicopter were in action within minutes and the man was rescued. He was airlifted to hospital in Oban but very sadly he died later.

My heart goes out to his bereaved relatives.

It just emphasises the power of the sea. We had enjoyed kayaking in these strong currents just a few days before on our holiday. Now someone else on holiday, in the same place, has lost their life.

We cut our holiday short and stayed on the sheltered side of the island due to the wind conditions, which made kayaking difficult. I am glad we did. We are fortunate, we will be able to return to Islay.
Posted by Douglas Wilcox at 10:22 pm No comments:

The Sound of Islay 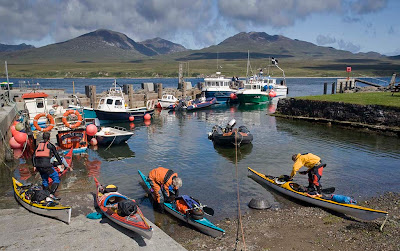 After disembarking from the ferry at Port Askaig, we wasted no time, in getting onto the water. We did not even stay to sample the ales of the Port Askaig hotel, whose beer garden conveniently overlooks this little jetty. It has been a licensed premises since the 16th century.

With the hills of Jura just a short distance away over the narrows, at 3 hours past the turn of the tide, the south going ebb was running strongly down the Sound of Islay. Even though it was neap tides, the current was sweeping past the mouth of the harbour and it was quite a sight to see a 3,000 ton ferry break out into the current. The combination of tide, wind and forecast made our decision to go south with the flow an easy one. We were on the water by 16:00 hours. 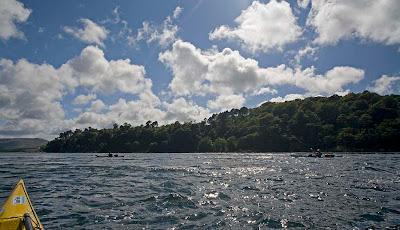 Although the spring rate in mid sound is 5 knots, we hit 10 knots in the current just outside the harbour. The wooded slopes of Dunlossit estate made a gentle introduction to the wild and remote east coast of Islay beyond. The south going ebb in the Sound of Islay starts at +05:15 HW Dover and the North going flood starts at -00:50 HW Dover. The spring rate is 5 knots. 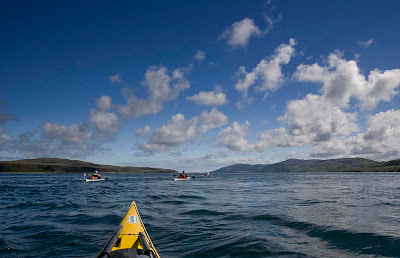 We then made our way into mid channel to take maximum advantage of wind and tide. We averaged 12km/hour (6 knots) down the upper part of the Sound of Islay. 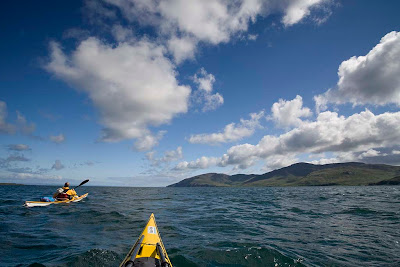 The tide slowed as we approached the entrance of the sound with Am Fraoch Eilean on the left and McArthur's Head on Islay straight ahead. The distant Kintyre peninsula can just be seen on the horizon. We now turned west and made for Islay's lonely eastern shores. 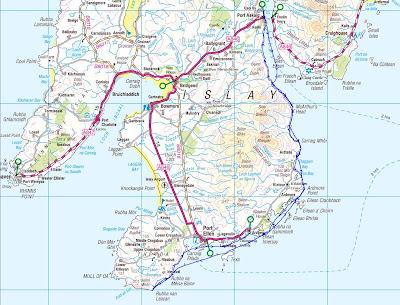 This map shows the GPS track of our route over the 4 days of our visit.