It has just been announced that the British writer Will Self will be the first writer in residence at the restored Craighouse Lodge near the Jura whisky distillery. He is following in the footsteps of George Orwell who sought the solitude of Jura to write "1984" in the remote farmhouse of Barnhill in the north east of the island. 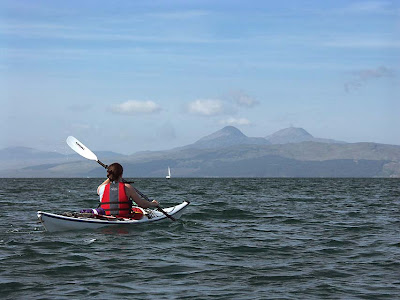 Sea kayakers are also drawn to Jura. Its famous Paps guide their crossing of the Sound of Jura. The tides can be taken advantage of and a day trip is possible. 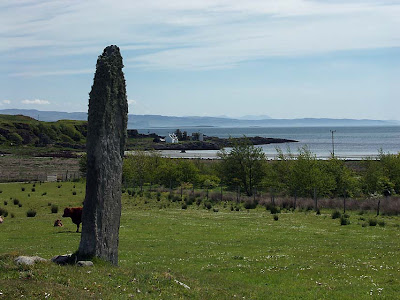 We launched at Carsaig Bay on the mainland and landed here at Tarbert Bay on Jura's east coast. Just behind the beach is a solitary, lichen covered standing stone of great antiquity. Some standing stones might have been connected with astronomy, others with religion or sacrifice. Possibly this one was simply a meeting place. Long before the written word, our ancestors were communicating with each other round stones like these. Unfortunately their oral tradition has long been lost.

With all our technology, is it likely our blogs will generate discussion in thousands of years? I think not, our enjoyable electronic chatter is far too ephemeral. Will 1984 still be read? If it is, will its meaning be understood, so far removed from the troubled times it was written in? I wish Will Self well in his endeavours. He may find inspiration at Tarbet Bay beside the stone of our ancestors. We might not know what its message means but it has transcended 4,000 years.