Fitting an electric pump to a sea kayak

An electric pump will allow you to start paddling and bracing immediately after performing a reentry and roll in rough conditions. I believe it makes a significant contribution to your overall safety in challenging conditions, should the worst happen and you find yourself out of your kayak.
There are many different web pages on how to do install a pump but many are complicated, involving many connections switches, relays and connections and some are compromised by the owners reluctance to drill a hole in the kayak. In a marine environment, the more connections you have, the more likely it is that one will fail.

I have chosen a different approach, which uses a minimum number of connections. The Rule 25S-6WC 500GPH automatic bilge pump is designed for jet skis. Inside the pump body an electronic circuit spins up the pump for about a second every 20 seconds. If no resistance (water) is met then it switches off. If resistance is met, it will carry on pumping until air enters the pump inlet when it will stop. After this it will go back to spinning up every 20 seconds. (Some other Rule automatic pumps spin up much less frequently and are therefore unsuitable for kayaks.) The battery draw is negligible. I used it for 10 days in the Outer Hebrides and at the end of the 10 days there was enough battery power to empty the kayak several times. I have chosen not to use a switch or a fuse. I chose to use a sealed lead acid battery because the pump is 12 volts and if you were to use rechargeable AA batteries you would need 10, which is a lot of connections! Also most NIMH AA rechargeable batteries don't hold their charge in storage and it is a hassle to charge 10 just before you go out. They also have poor cold weather performance compared with a sealed lead acid battery. 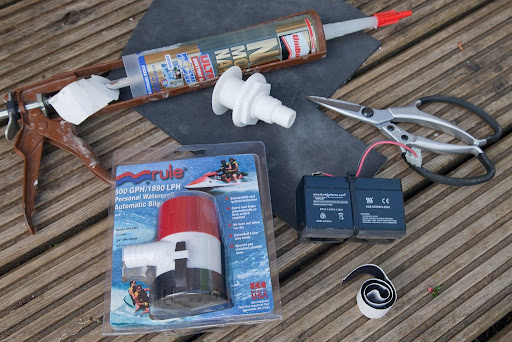 Rule 25S-6WC pump
12v 1.3Ah sealed lead acid battery fitted with...
snap together connector which is soldered to the battery terminals.
(I used to use simple spade connectors straight onto the battery terminals but I found they came off.)
12V SLA trickle charger, don't try to use a car battery charger on a small battery like this!
Some 3mm sticky backed foam to stick on the back of the battery and the bulkhead, where it will fit against.
Velcro hook and loop tape to stick onto the foam pads on the battery and the bulkhead. (I found you get a better "stick" using the foam between the Velcro and hard surfaces.)
A 3/4" skin connector for the hose.
About 10" of 3/4" hose
Unibond "No more nails", waterproof adhesive, which is much more effective than silicone sealant. 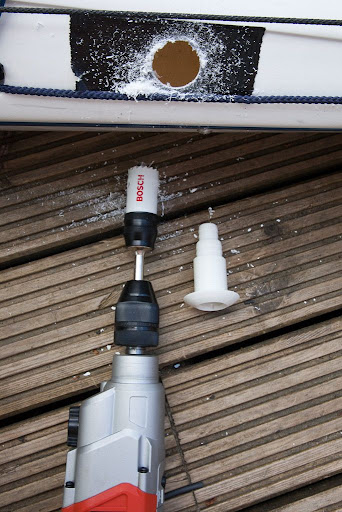 The fun starts drilling the hole with a hole saw. I like to put pumps in front of the footrests, next to the forward bulkhead. Put some tape over the gel coat and drill very slowly. 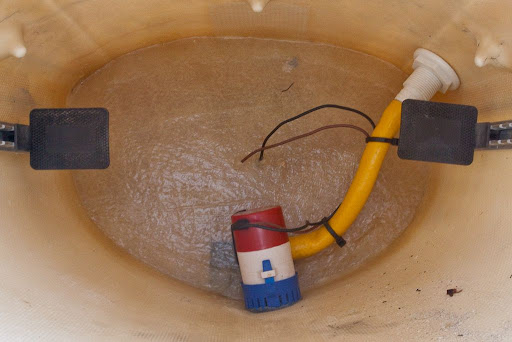 Bed the connector in a little adhesive and screw it up from inside. Glue the pump mounting base (blue) to the hull, because of the vee bottom, I have stuck it slightly off the mid line to get it square on the hull. It is best to roughen the pump base and the hull with coarse abrasive paper then clean both surfaces with a solvent such as alcohol. Leave the pump base glue to dry for 24 hours then fit the hose, heating it in hot water will make it more flexible. Clip the pump into its base. Now drill two 3.2mm diameter holes in the middle of the bulkhead and push the wires through to the front compartment. Seal on both sides with glue. Leave enough wire to bring the pump back to the cockpit opening for cleaning its filter (if it ever gets blocked) and use cable ties to secure the loose wire to the hose. 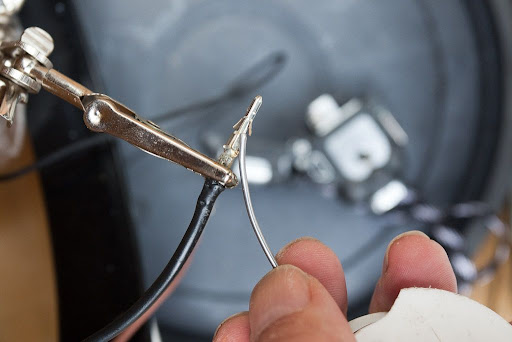 Working in the front hatch, solder the connectors to the wires. Working outside I find it easier to use one of the little high temperature jet butane lighters than a soldering iron. 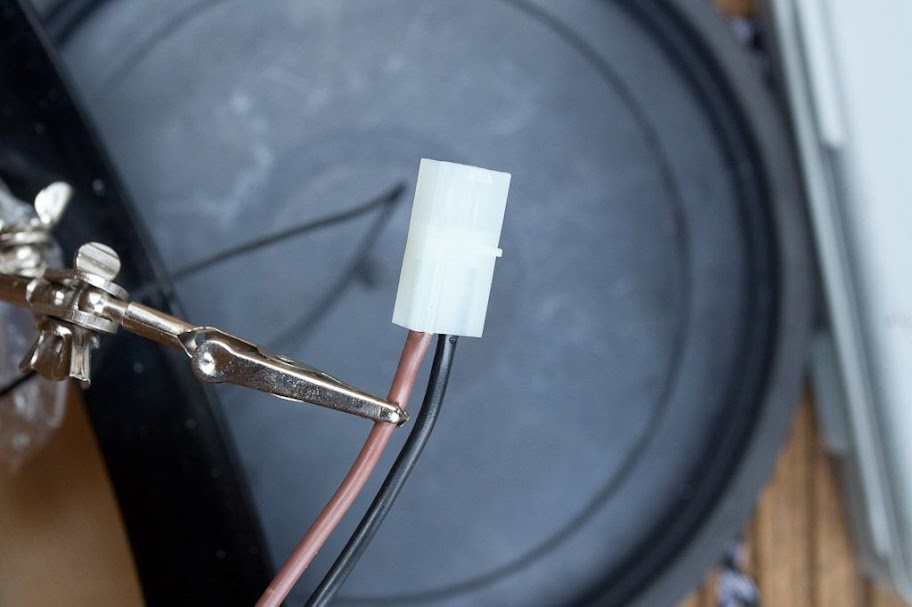 Push the plastic connector on to the two terminals and give it a good spray with water dispersant. 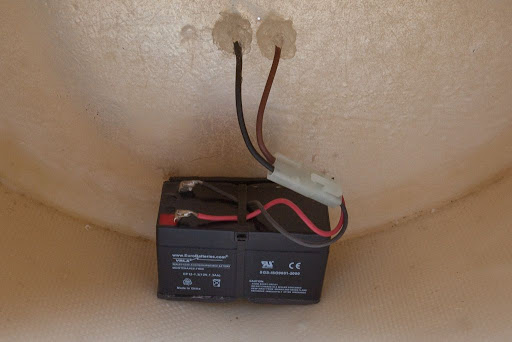 Now the whole lot can be assembled together and the battery stuck to a Velcro pad on the bulkhead. You will now hear the pump spin up then stop every 20 seconds until you pull the connector apart. The connector can only clip on one way so you will not be able to reverse the polarity by mistake. 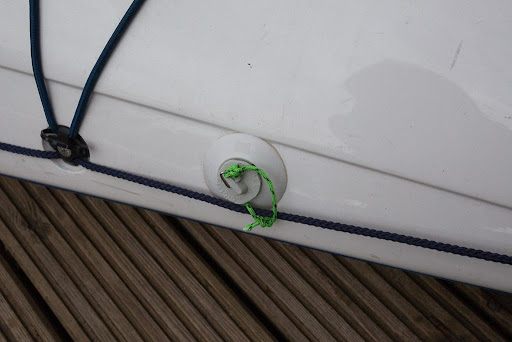 I have tried three different one way valves in the hose. Even the best reduced the flow rate by 50% so I don't bother. You can fit a kitchen sink plug to the outside of the connector. Some people suggest putting a loop in the hose to prevent sea water coming in through the pump but the Rule instructions specifically warn against that as it can create an airlock which will stop the pump.


You bet it does and its simplicity makes it reliable!! 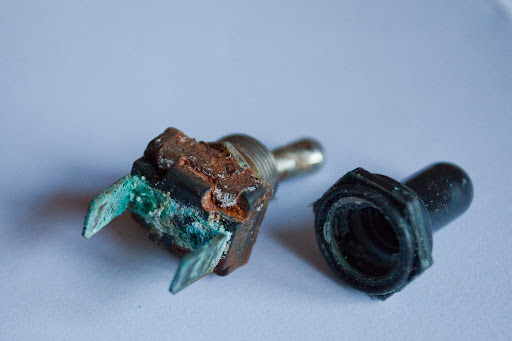 This is why I do not like switches. This switch was mounted in the day hatch with a waterproof boot covering the toggle which went forward through the rear cockpit bulkead. It has seen three seasons' use and was sprayed twice per year with a Suzuki brand wax spray for protecting outboard motor electrics. It did still work when it was removed but for how much longer...?

There are some other links to installing pumps,
Here
Here
Here and
Here
Posted by Douglas Wilcox at 9:27 am 17 comments: