The Cannibal's Cave and Skippy the Bush Kangaroo! 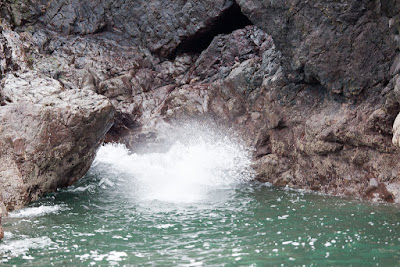 From Whilk Isle, we paddled towards the cliffs of Balcreuchan Head. Almost immediately we came across this blow hole. Unfortunately the swell wasn't quite big enough for real explosions but it still made a satisfying "boom, whoosh!" 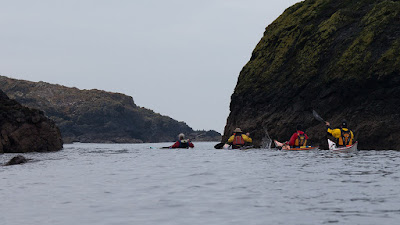 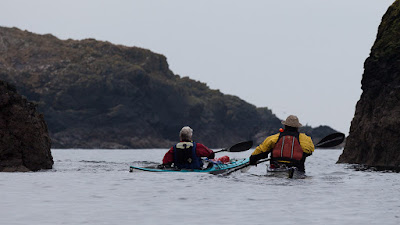 ...on our way towards Sawney Bean's Cave in Balcreuchan Port when, all of a sudden, Phil gave a great shout. Half expecting to see the Great Cannibal himself, we looked up as Phil pointed high on the hill... 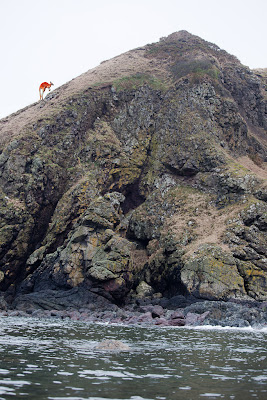 ..."Look, it's a real, red kangaroo....why it's, it's... I think it's Skippy!". We all nearly fell out our kayaks with laughter, Phil had seen a roe deer leaping up the side of the hill on its rear legs. It seemed to have hurt one of its front legs, which it held close to its chest, while leaping away on the other three.  At first glance it might have looked, a....bit..., like a kangarooo. But...

Clearly Phil has been spending too much time watching "Skippy, the complete collection (vol 1)" DVD, which David had given him for Christmas. 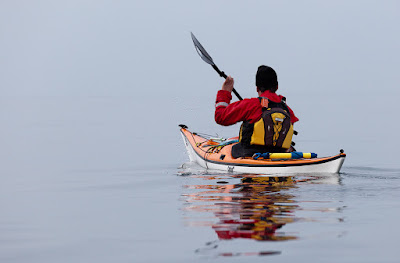 As a somewhat red faced Phil paddled on, a chorus of "Skippy, Skippy,....Skippy the Bush Kangaroo" gently wafted after him. Clearly we were going to have a good day out and we had hardly started!

By the way, the entrance to the Bean's cave is in the middle of the above photo with Skippy. It is entered by traversing the horizontal groove above the sea, lower right, then climbing the slanting curved gully up to the cave.
Posted by Douglas Wilcox at 7:00 am 16 comments: