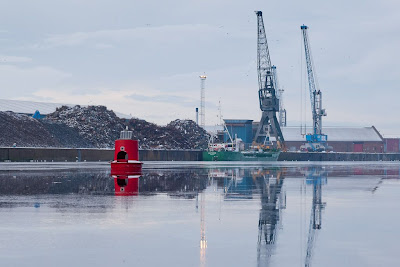 Back on the south side of the river Clyde, we passed Shieldhall and came to the King George the Fifth dock. Estuary control had already warned us that the coaster MV Boisterous was making her way up river to the KGV dock but she was already moored by the time we arrived. We had already seen her making her way up the Clyde when we left shuttle cars at Port Glasgow. 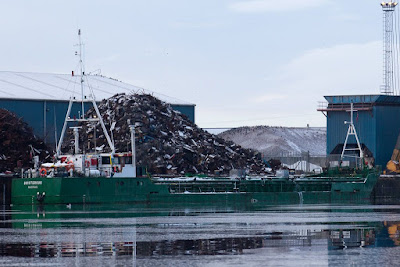 MV Boisterous is a 59m x 9m general cargo ship that plies the west coast of Scotland, Northern Ireland and the North Irish Sea carrying loads such as logs and lime. The riverside quay was piled with loads of scrap metal for export and huge piles of rock salt, imported from the salt mines in Northern Ireland for the winter roads. The KGV dock has a wide mouth which allows large ships to manoeuvre inside. There were no cargo ships but the Caledonian MacBrayne car ferry MV Coruisk was tied up for the winter inside.  In summer she services the Mallaig to Armadale route to the Isle of Skye. In the winter she is a relief vessel for the Dunoon and Rothesay ferries

Down from KGV dock, we came to Braehead Quay. This no longer services ships but is a temple of modern consumerism, i.e. the Braehead Shopping Centre.  The long grey building beyond the curved roofs of the shops houses Xscape, a sports centre with a 200m snow slope and one of the tallest climbing walls in Europe. As a nod to the Clyde's past, the brick building is the Clydebuilt Museum. It was funded by the Shopping Centre for the last 10 years, possibly as a conditional part of the  Centre's planning permission. 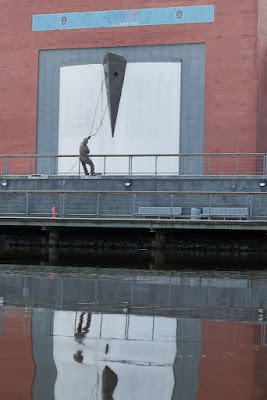 Now the Shopping Centre have pulled the plug on the museum and it is shut for good, just like the ship yards it was built to commemorate. Now the Brae-lians probably don't even know there is a river behind the shops. 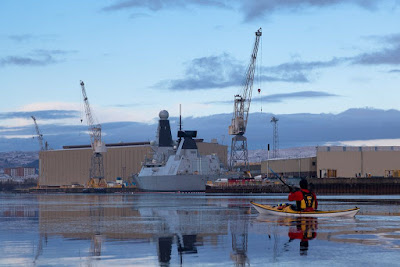 Giving up on entrance to the museum, we crunched through the ice to the north bank again. Thankfully a shipyard on the Scotstoun side is still building ships. It is the former Yarrow yard, which opened in 1904. It is now part of BAE systems that own the Govan yard further upstream. 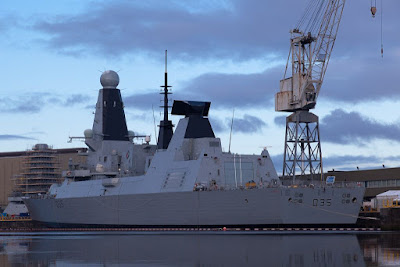 The yard fits all the high tech bits to the naval ships which are assembled and launched at the Govan yard. This is HMS Dragon, which is undergoing  final outfitting. We recently saw her on the Clyde undergoing sea trials off Arran. 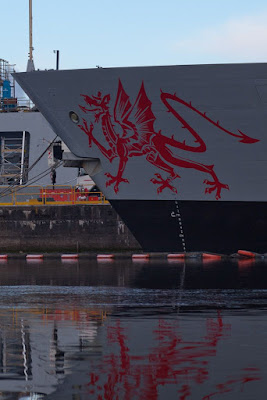 The Dragon is a nice touch on her bows! 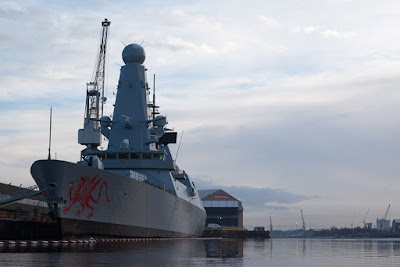 HMS Dragon was launched in November 2008  and will shortly enter service with the Royal Navy. 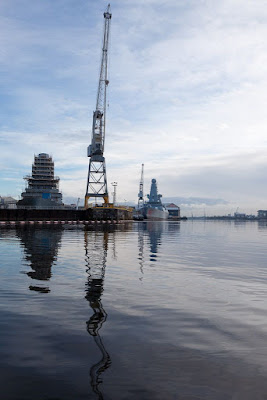 In the berth next to Dragon the most recently launched sister ship, HMS Duncan is fitting out. She was launched from the Govan yard in October 2010. It is likely that she will be the last ship to take a curtsy at end of a traditional slipway launch on the Clyde. All future Clyde ships will be built in dry docks. HMS Duncan is named to honour Admiral Adam Duncan, who was victorious in a battle with the Dutch fleet in 1797. 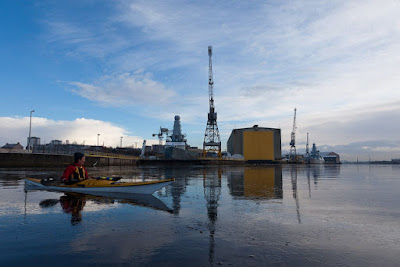 Downstream of HMS Duncan, a third type 45 destroyer is fitting out. She is HMS Defender and was launched from Govan in October 2009.

So far there had been so much interest that we had covered only 10km in 3hours10minutes and still had 21km to go. We had better get our skates on, literally, the river was still frozen!
Posted by Douglas Wilcox at 8:24 am 2 comments: