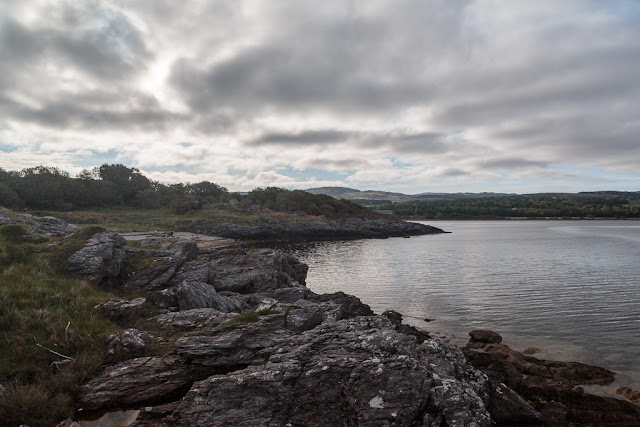 Today Kilfinan is a remote and wild landscape but... 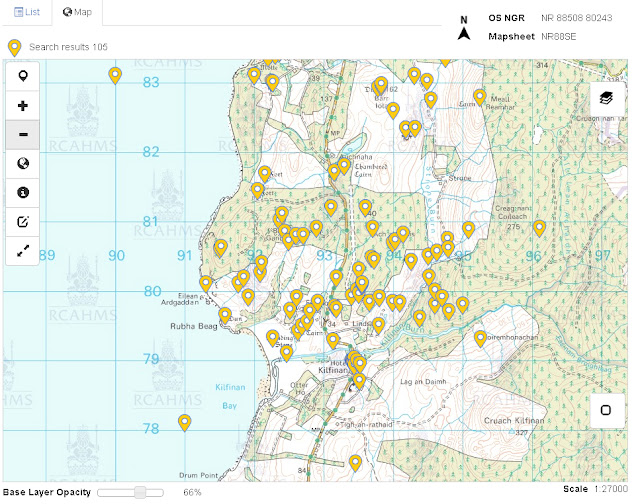 www.canmore.org.uk (You will need to create an account to see the mapping)

...place an archaeological map over today's map and you will discover this area was once a near metropolis. There was an ancient dun or hill fort on... 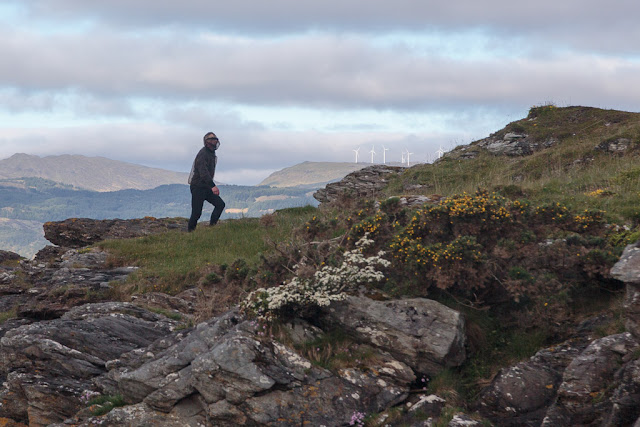 ...the hill to the north of the beach so we decided to climb up to it... 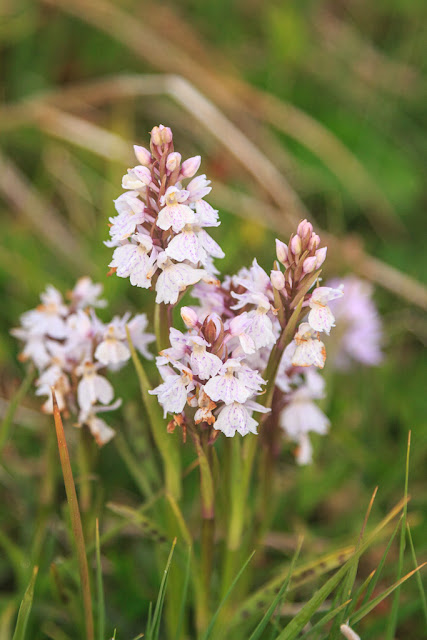 ...passing clumps of spotted orchids on the way. 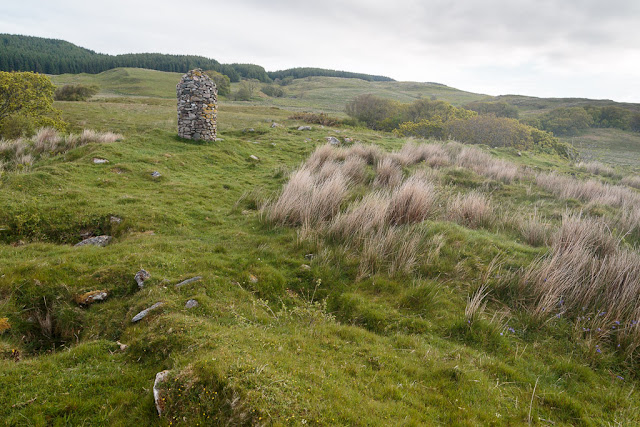 Today the remains of the dun are largely two semi circular walls about 30m across and not much above ground level, which date from the Iron Age. They were built by Celtic people in pre-Roman times. However, the site was inhabited until late mediaeval times with a succession of wooden buildings. It became known as Caisteal Mhic Eoghainn (Mac Ewan Castle) and was the base for the Ewan of Otter clan. There were multiple, unrelated MacEwan clans in Scotland and the Ewans of Otter and their land became subsumed into the Campbell clan after their last chief, Swene Mac Ewen, died in 1493. 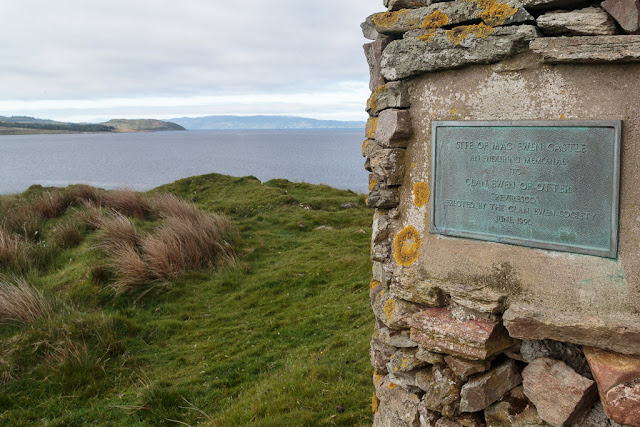 There is a stone memorial with... 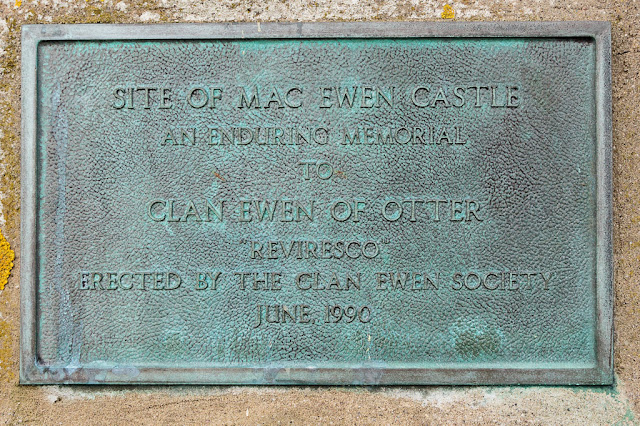 ...a brass plaque on which the clan motto "Reviresco" is displayed. This means grow green (or young) again. 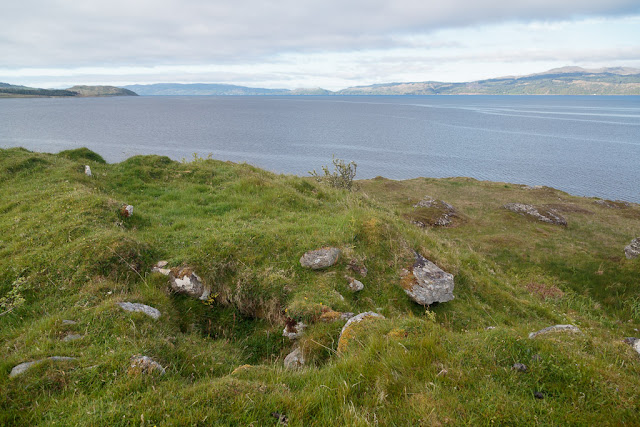 Well the former Mac Ewan lands have grown green again even though that branch of the clan died out. The castle certainly had a commanding position. This is the view down Loch Fyne and this is the view... 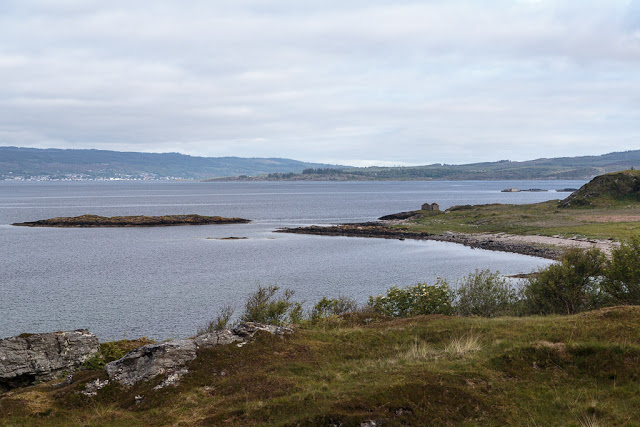 ...view up Loch Fyne. The building by the shore is a 19th century salt house. Salt was needed to preserve the prodigious numbers of herring which were once found in the loch. Other herring were preserved by smoking...the Loch Fyne kipper. One branch of my family came from here and my great great grandfather MacCallum was a herring fisherman. His sons followed him but the fish ran out and they had to fish further and further afield. My great, great uncle was washed overboard and lost at sea in the Southern Ocean. 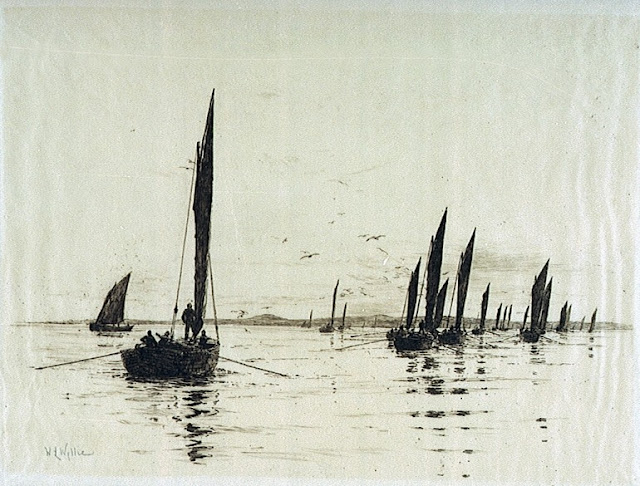 The traditional Loch Fyne herring fishermen used sail and oar powered boats and drift nets but the introduction in the mid 19th century of steam trawlers (based in Tarbert and Campbeltown) increased the overfishing and there was bitter rivalry between the two types of fishermen. Violence ensued and the Royal Navy had to station HMS Porcupine (a 3 gun wooden steamer built in 1844) on the loch to keep the peace. My great grandfather gave up the sea and moved to Glasgow where he got a job with the Caledonian Railway company.
Posted by Douglas Wilcox at 12:56 pm No comments: