No saints on St Kilda! 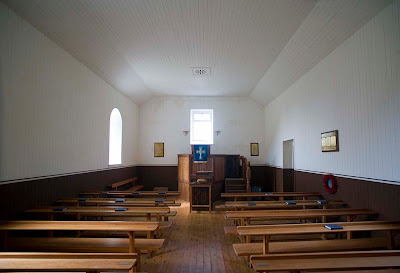 The door of the church on Hirta on St Kilda is on the end away from the sea and the prevailing wind. It is a plain building, with little ornamentation. This is not only because of the relative poverty of materials on St Kilda but because of the zealous form of Protestant Christianity which was practiced here in the 19th century. There are of course no figures of Jesus on the cross, or of Mary or the Saints.... 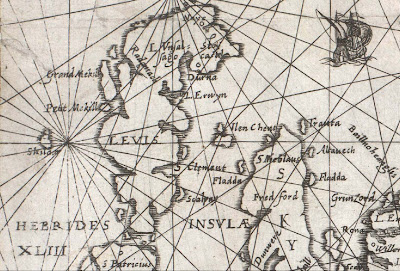 .... talking of which, even the name St Kilda is a misnomer. There was no St Kilda. It was a later corruption of the name "Skildar", which appeared on the Nicolay Rutter (chart) published in 1583. One theory is that Skildar is from the old Norse word for shield. From a distance, the cliffs of the St Kilda archipelago look like shields rising from the sea.

The earliest written reference to the islands was to "Hirta" in 1549. Sir Donald Monro, High Dean of the Isles, wrote a manuscript: "A description of the Western Isles of Scotland called Hybrides" following a tour made in 1549. Here is a quotation from his description: "The inhabitants thereof ar simple poor people, scarce learnit in aney religion, but M’Cloyd of Herray, his stewart, or he quhom he deputs in sic offfice, sailes anes in the zear ther at midsummer, with some chaplaine to baptize bairnes ther, and if they want a chaplaine, they baptize ther bairns themselfes." 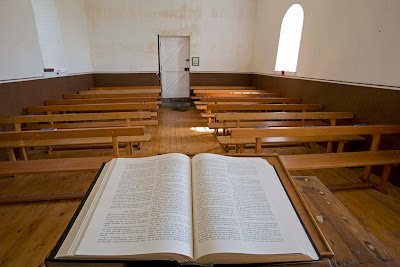 This is the view from the pulpit, which is reputed to be the biggest in all of the Western Isles. From it, the minister would preach long, long sermons. He also had a remarkably clear view of the door, so there was no escape!