"Nae man can tether time nor tide": the return to Ayr. 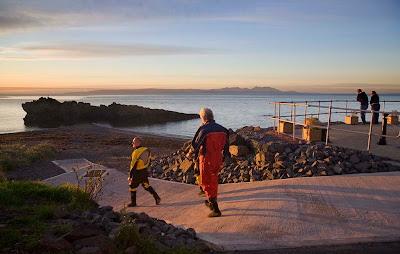 We emerged from the Anchorage bar to see the World bathed in a rosy glow. The "Sleeping Warrior" of Arran lay still on the far western horizon. 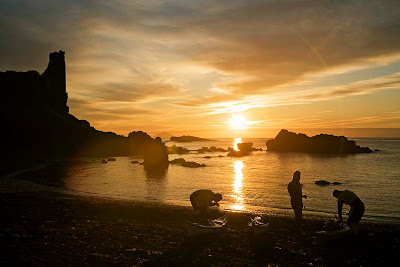 Our timing was impeccable. Beyond the Castle and the skerries and even beyond distant Ailsa Craig, the golden orb of the Sun was just kissing the horizon as we made our way to sea again. 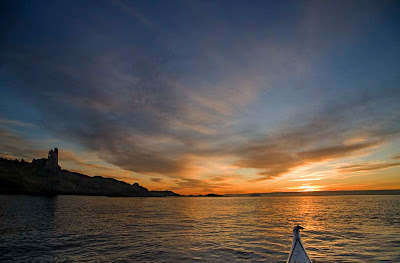 After a few pulls on our paddles we turned back to catch a last glimpse of the sun but it had already gone. 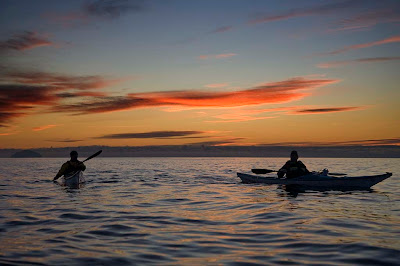 The temperature dropped like a stone, the pipping of the oyster-catchers' calls died away and the flocks hunched together on shore for the night. The silent winter silhouette of Ailsa Craig invited a return, but in the Spring when it would once again be surrounded by a cacophony of noisy breeding birds! 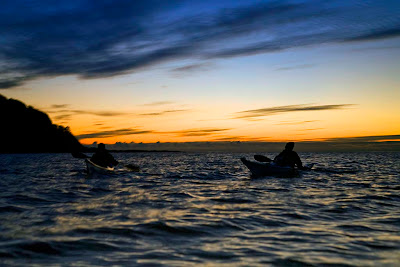 As the cold began to seep into our bones we felt another calling. 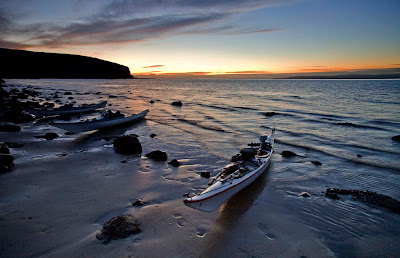 After a refreshment stop at Dunure, Bracken Bay is conveniently located for a final stop before landing at Ayr. Our last 5km were paddled in the dark, but once we rounded the Heads of Ayr the myriad stretch of the town's lights did little assist navigation. A quick compass bearing indicated that the constellation Plaedes would be our main navigational aid. However, our noses guided our final touchdown. The light north easterly breeze was blowing directly from Ayr India. The mixed pakora eaten on the sea front provided a spicy end to a perfect day and night's paddle!