The wreck of MV Captayannis, the Sugar Boat, and the sweet waters of the Clyde. 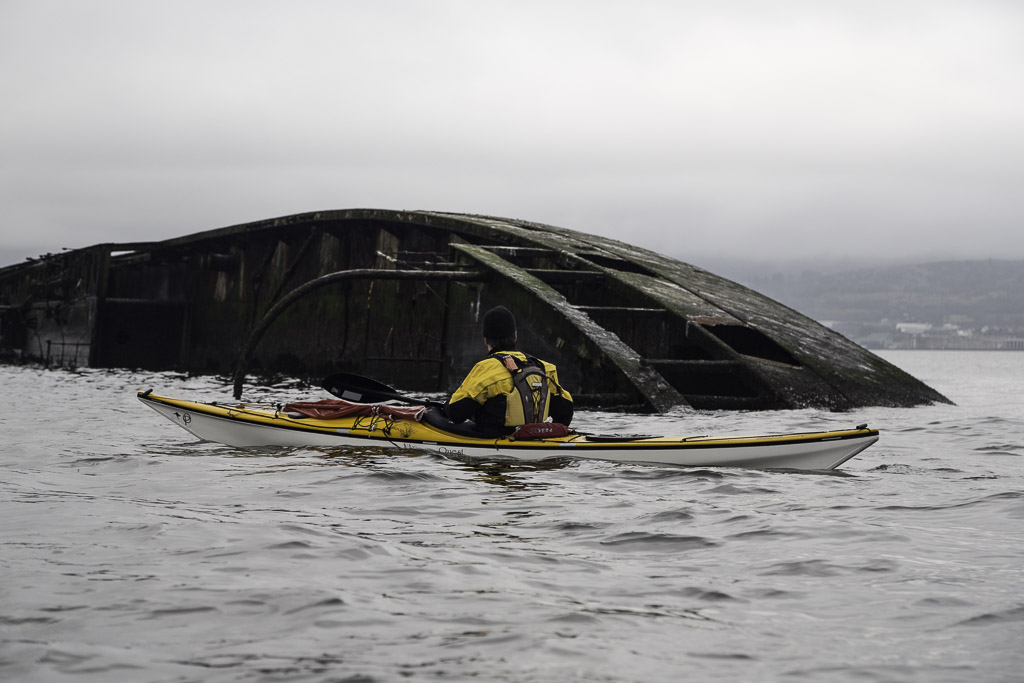 We had arrived at the wreck of the MV Captayannis. She was a Greek merchantman and on the night of 27/28th January 1974 she was anchored at the Tail of the Bank off Greenock. She was waiting to enter the James Watt dock to offload a cargo of raw sugar from Portuguese East Africa for Greenock's Tate and Lyle sugar refinery. I was staying in Glasgow at the time and I well remember the violence of the storm that got up that night. I could hardly walk from Hillhead underground station in Byres Road to Glasgow University's Dalrymple Hall, off the Great Western Road.

Paul Strathdee has posted this photo taken by Robin Wilson of MV Captayannis in 1973 over on ShipSpotting.com. It shows the Captyannis entering the James Watt dock in Greenock to discharge a load of sugar on one of her previous voyages to the port 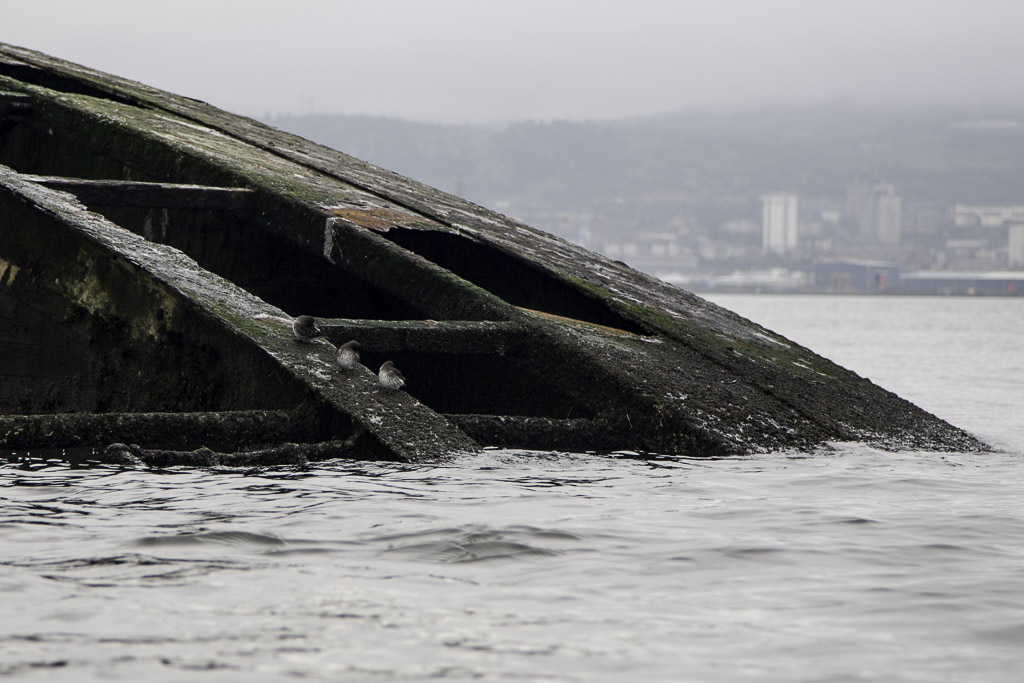 During that wild night, the Captayannis broke free from her anchor and the storm drove her downwind towards the BP tanker, British Light, which was also lying at anchor. Before she hit the bow of the tanker the Capytayannis's hull hit the tanker's anchor chains, which gashed her hull beneath the waterline. The Captayaniss drifted on, leaving the tanker unscathed, but she was already sinking. 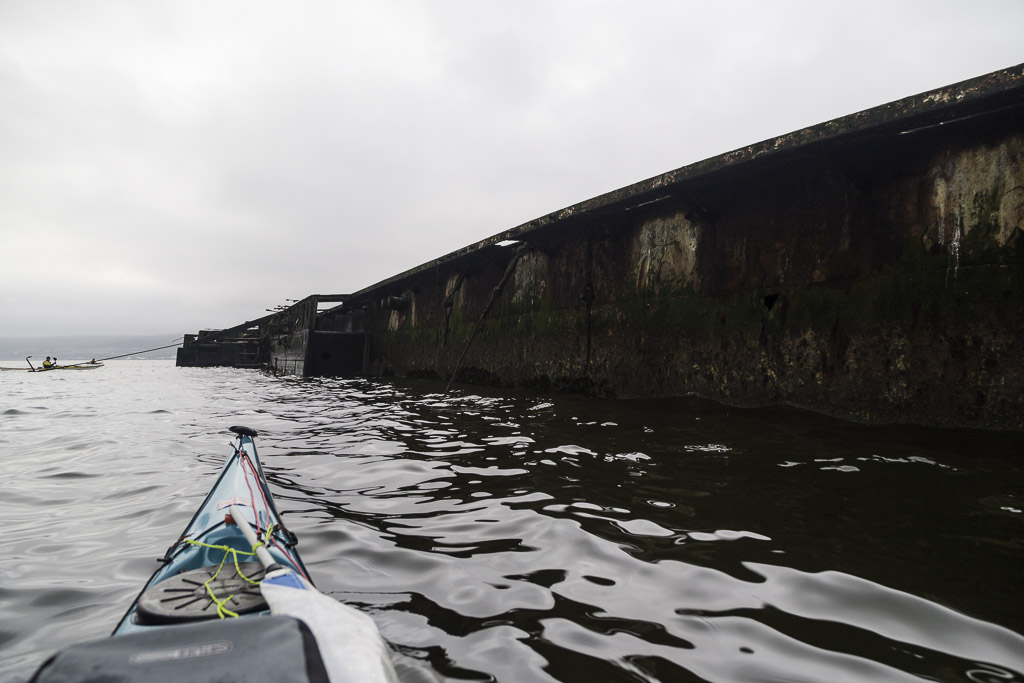 Captain Theodorakis Ionnis started the Capytyaniss's engines with the initial intention of running north to the shelter of the Gare Loch but the ship was sinking fast, so he ran her aground on a sandbank to the east of the deep water channel. Fortunately there was no loss of life.The tug Labrador and ferry MV Rover came alongside and all 29 on board were saved. The Capytayannis settled with a heel to port before tipping right over onto her port side. Due to an ownership/insurance dispute, no one claimed responsibility for the ship and she has lain on the sand bank ever since. Fortunately Captain Ionnis had run her well away from the shipping channels  and she does not pose a risk to shipping. Even at high tide she is still above water and her outline is now a familiar part of the Clyde seascape, where she is universally known as "the Sugar Boat".

This photo (from another day) shows the bulk carrier MV SeaLand Performance (on the right) anchored at the Tail of the Bank. You can see the hull of the Captayannis in the distance, beyond her port side. 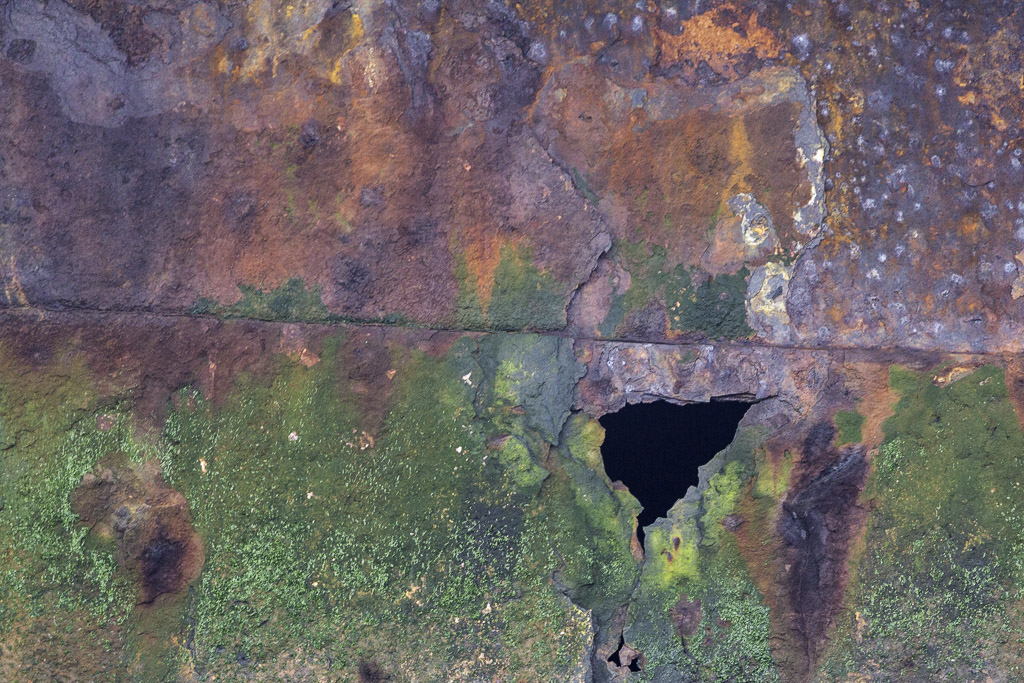 It was a strange feeling to be paddling along the deck of  ship from stern to bow. She is in surprisingly good condition as her hull points into the direction of the worst of the weather. However, her thinner deck plates have started to rust through. This hole leads down to the engine room and there was still a slight whiff of oil even after 40 years! 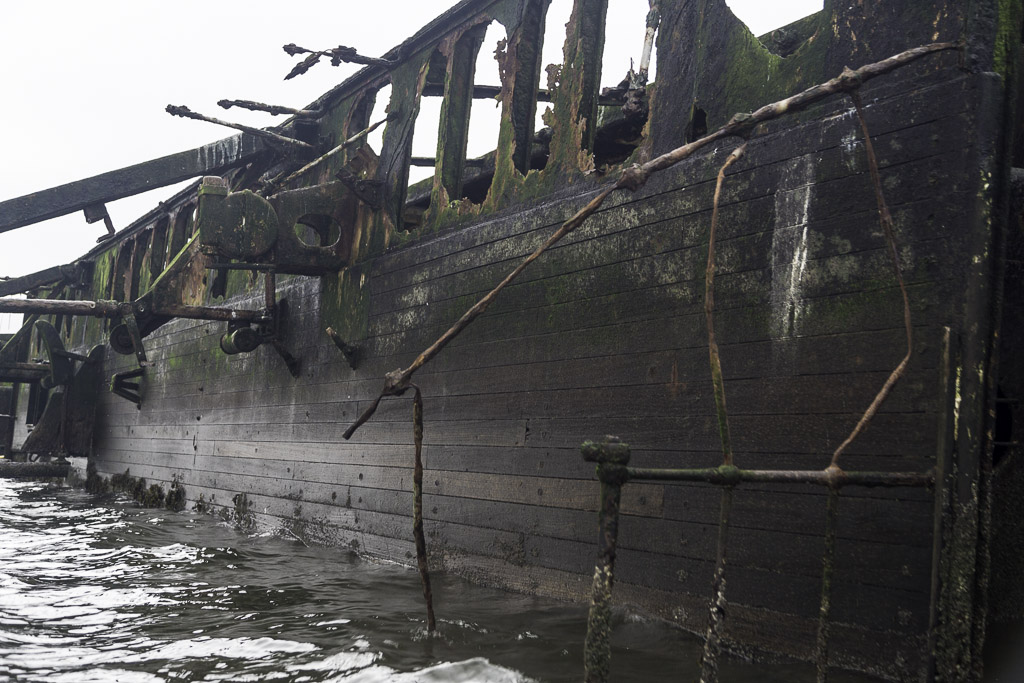 Moving forward we came to her wooden decking which was... 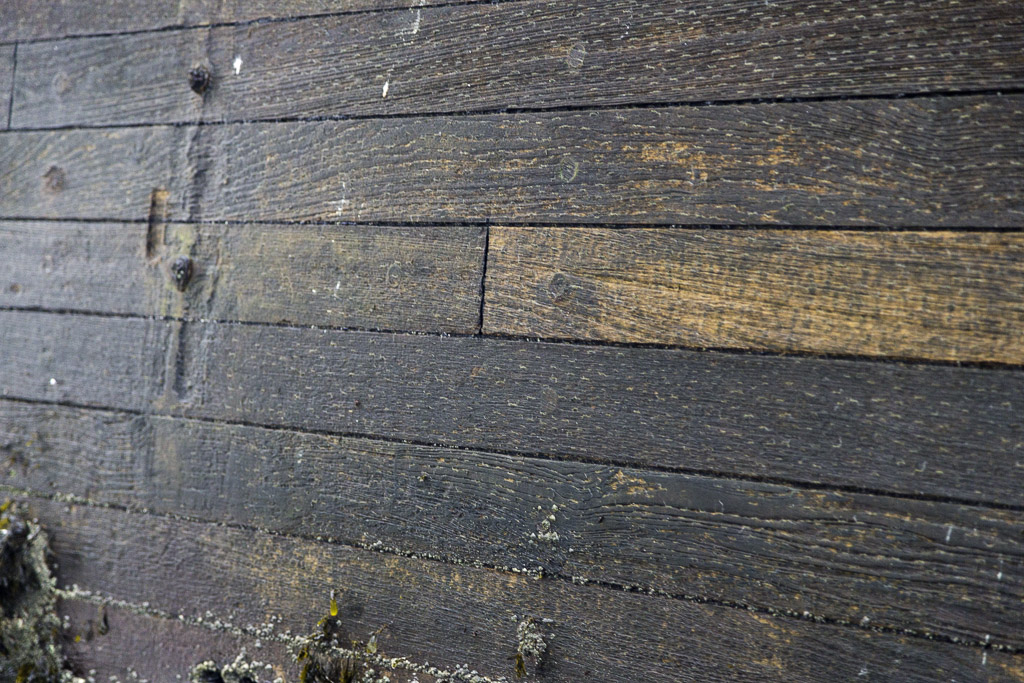 ...still in remarkable condition. The MV Captayannis was originally called the MV Norden and was built in Denmark in 1946. Sad though her wreck is, at least the Captayannis is still relatively intact. It is almost certain that her contemporaries have long since been broken up.


Photographer PWR has posted this photo of her as MV Norden over on ShipSpotting.com. 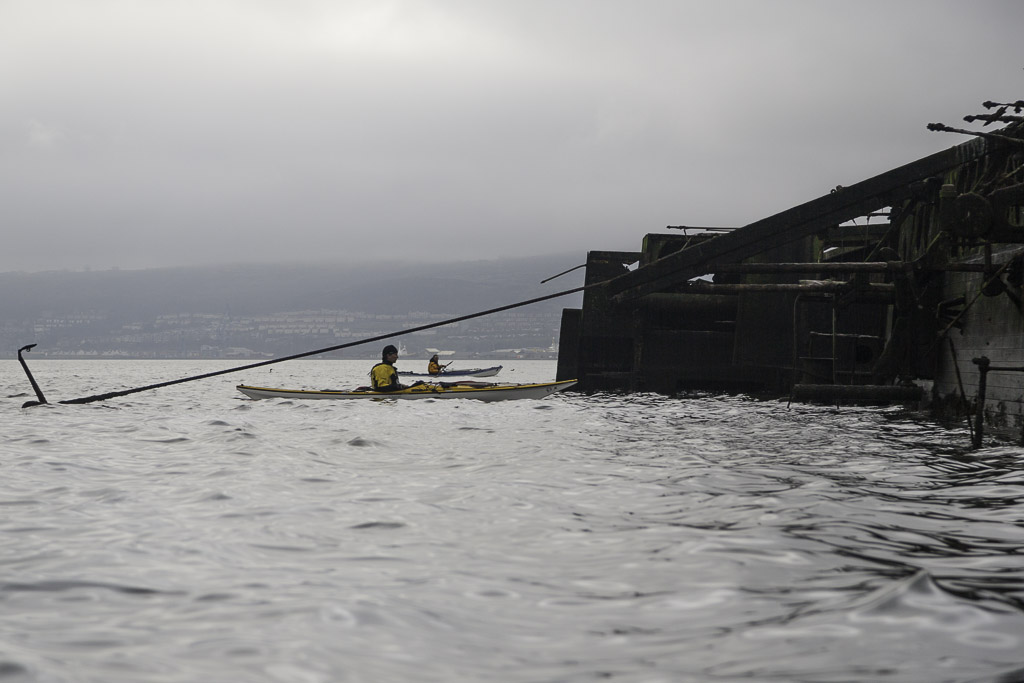 We slowly worked our way forwards along her aft deck  and under the remaining shroud for her aft mast towards her... 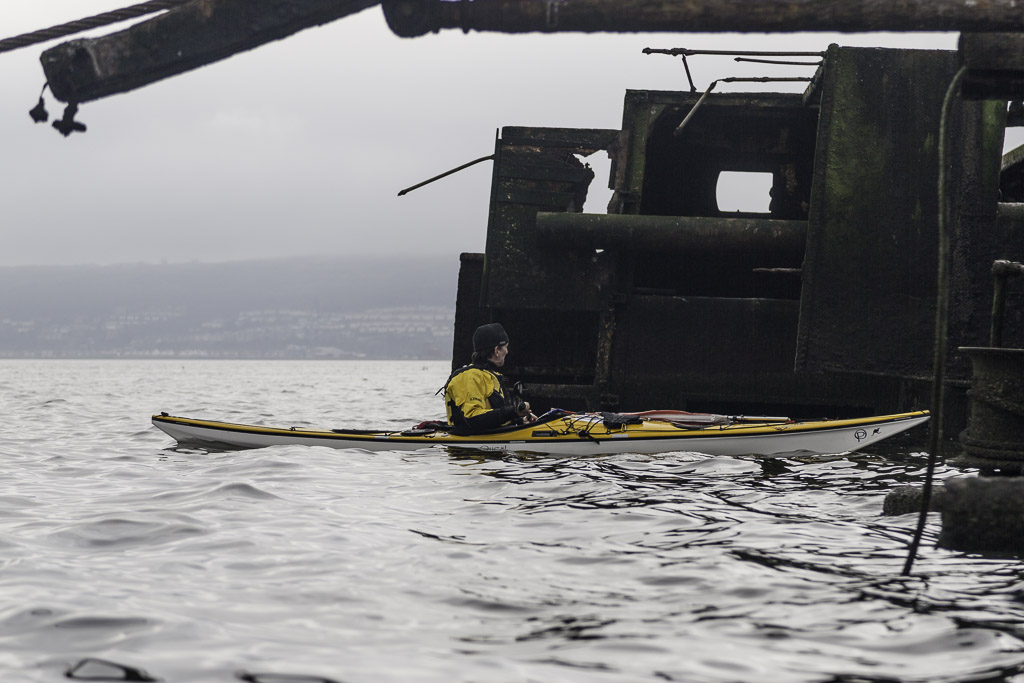 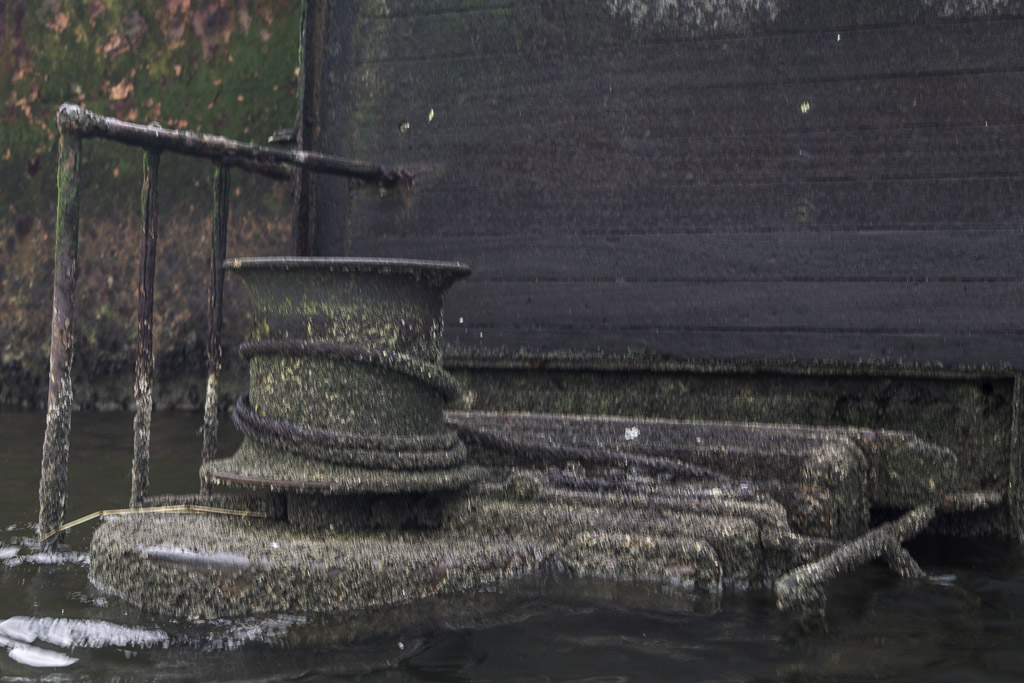 This windlass would originally have lifted cargo via the derricks attached to the mast. 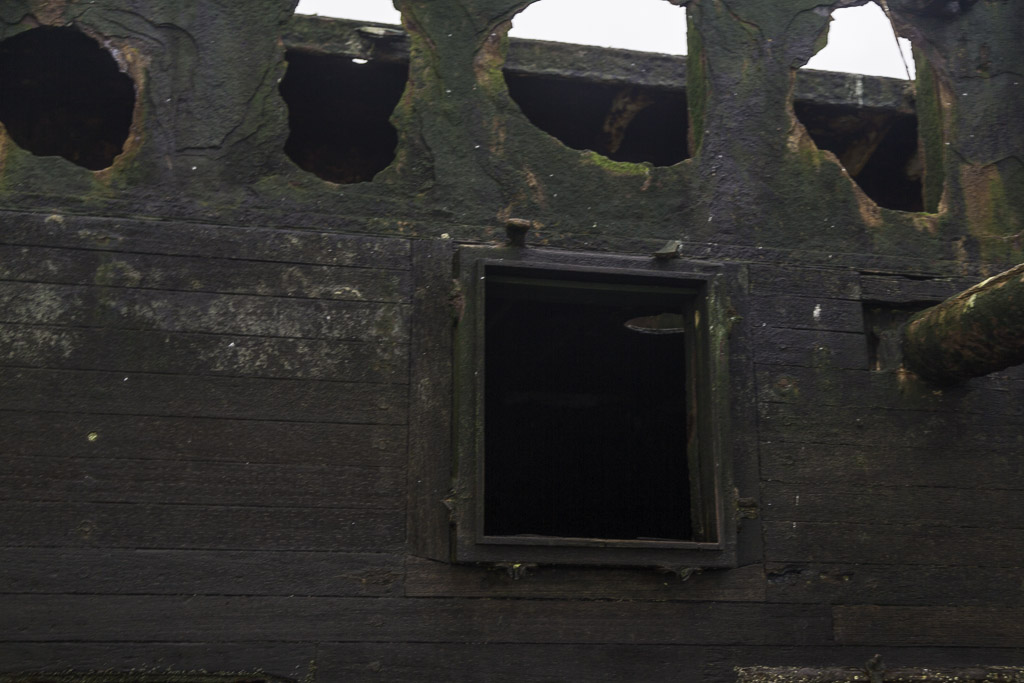 This hatch's cover has long gone. 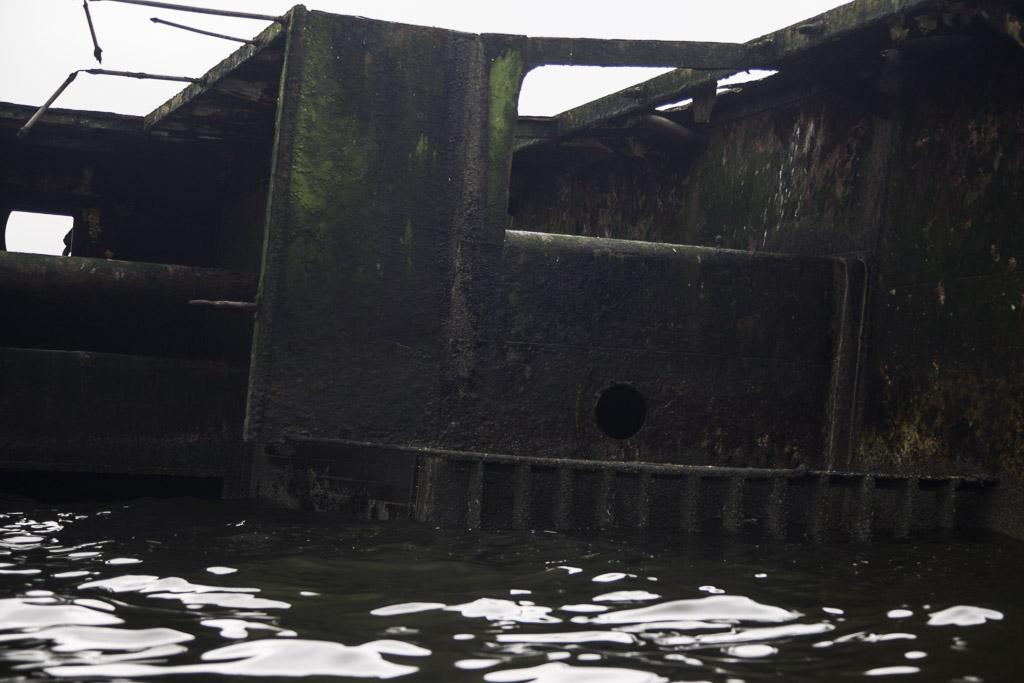 Near horizontal ladders lead up to what was once the upper decks of her superstructure. 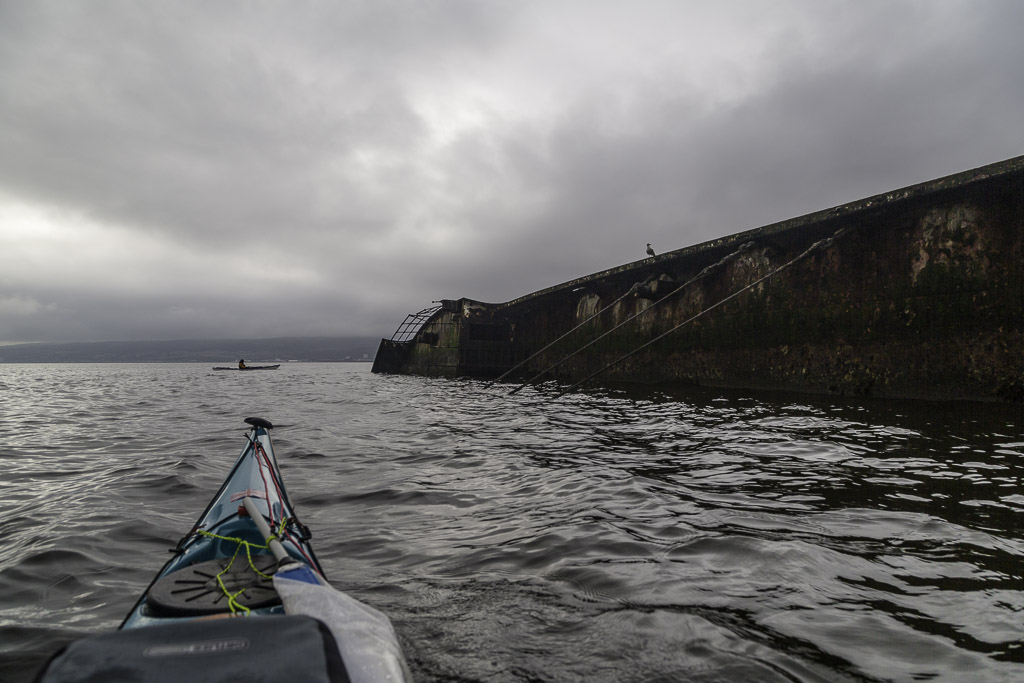 Forward of the superstructure we came to the long foredeck. The submerged fore mast was still supported by three shrouds on her upper, starboard side. 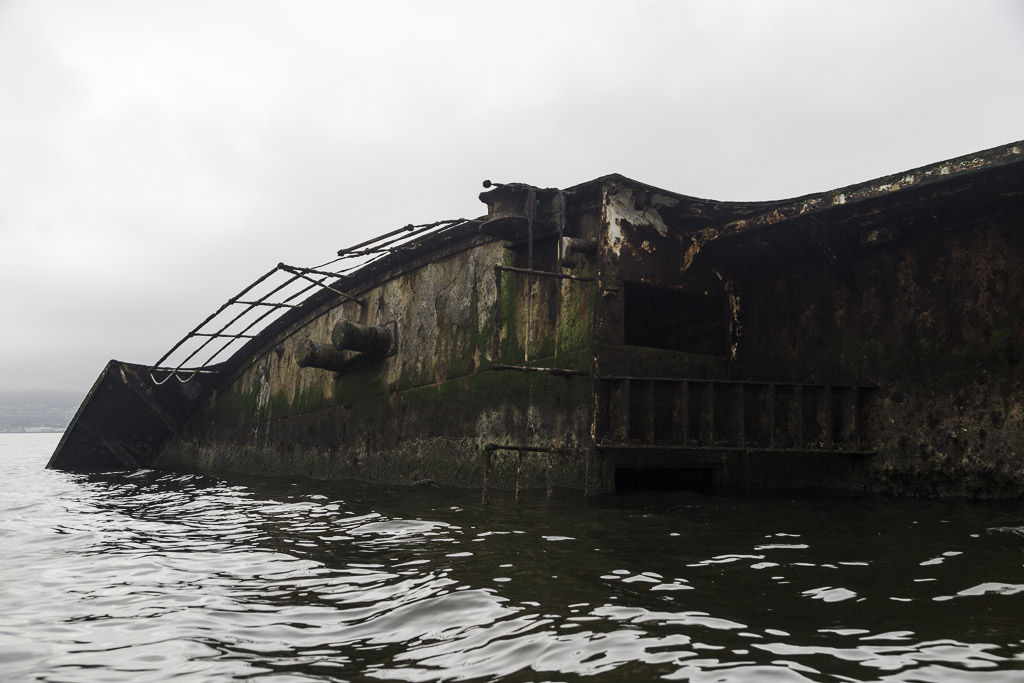 At low tide it is possible to paddle inside her forecastle which is still topped... 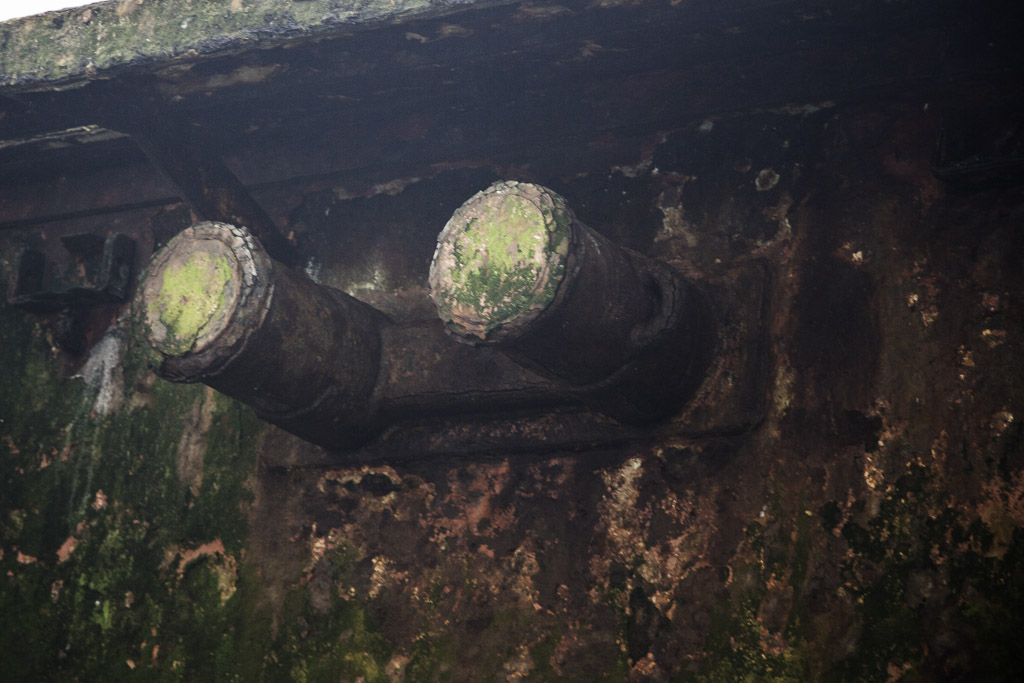 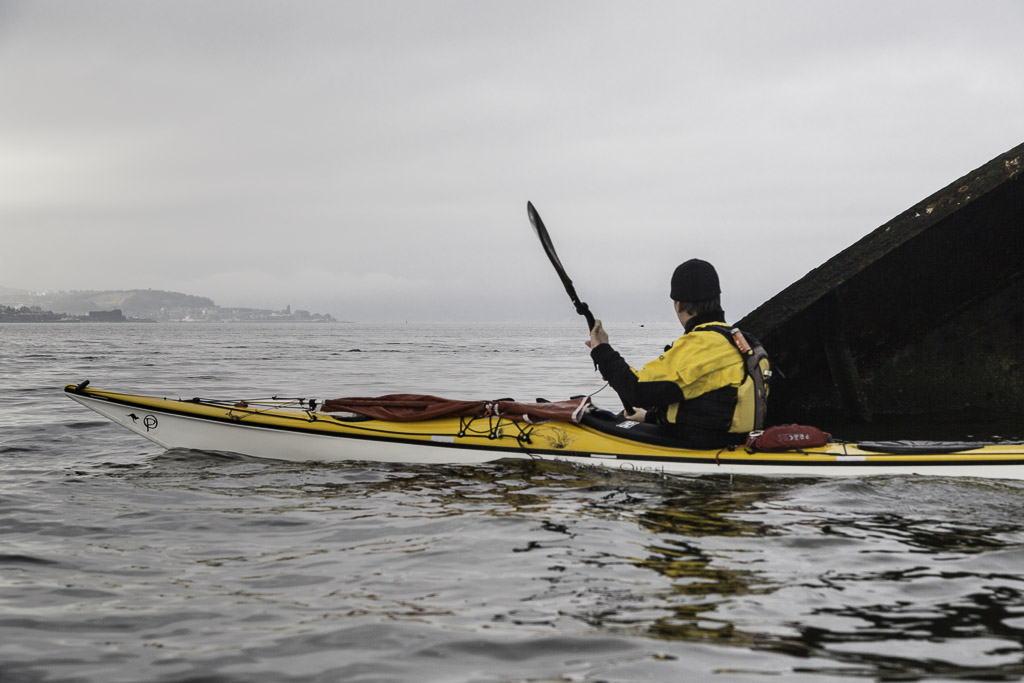 At last we reached the bow where... 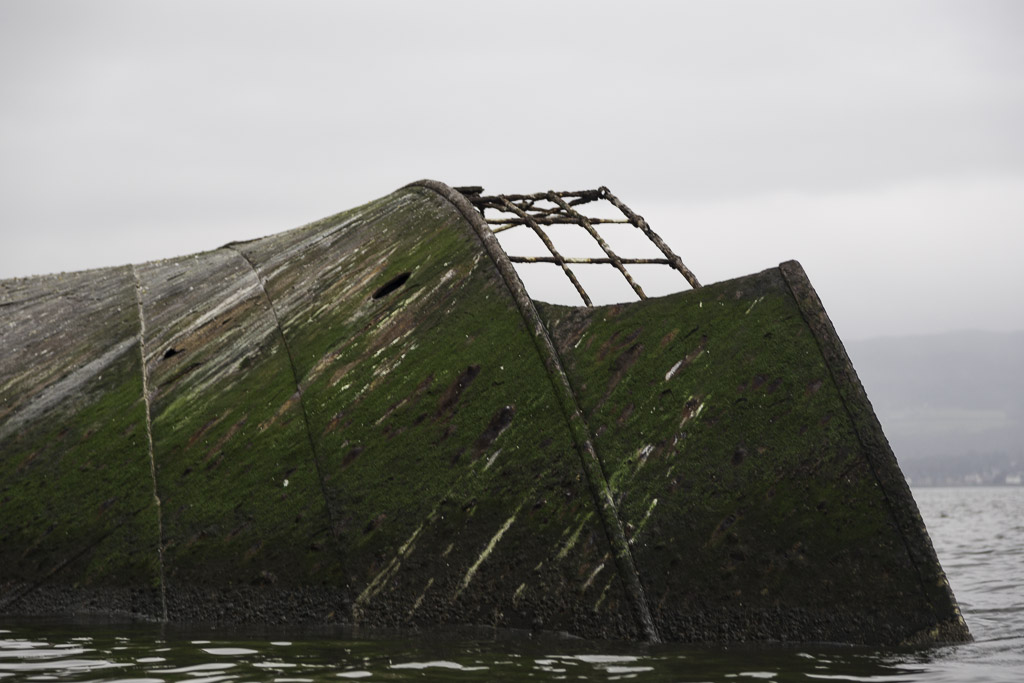 ...the fine lines of the Captayannis's... 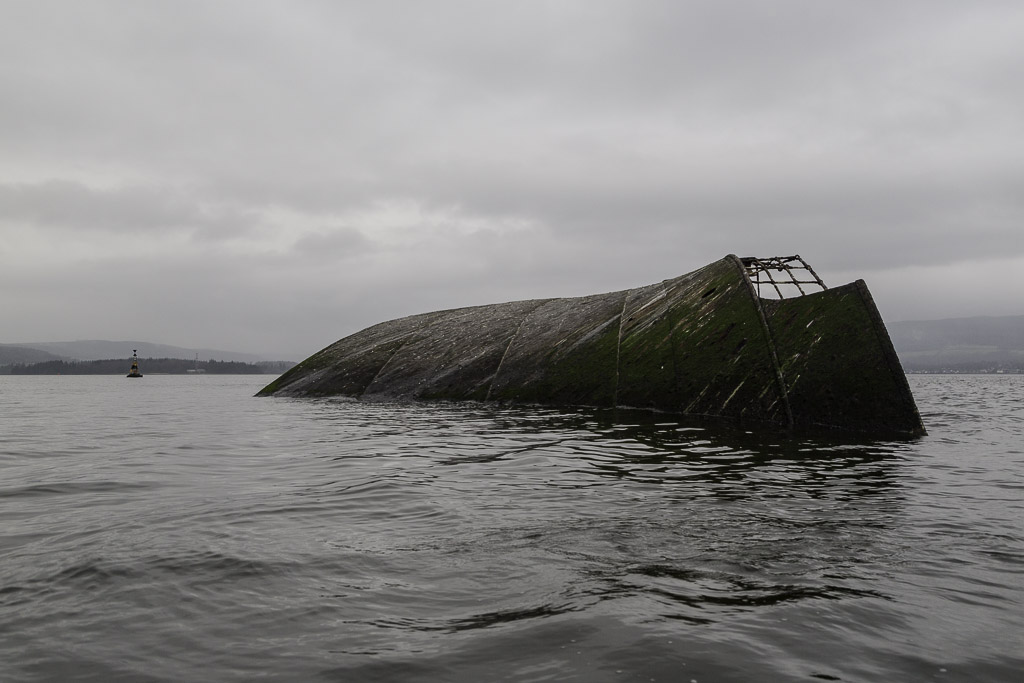 ...stem could still be seen stretching away to her... 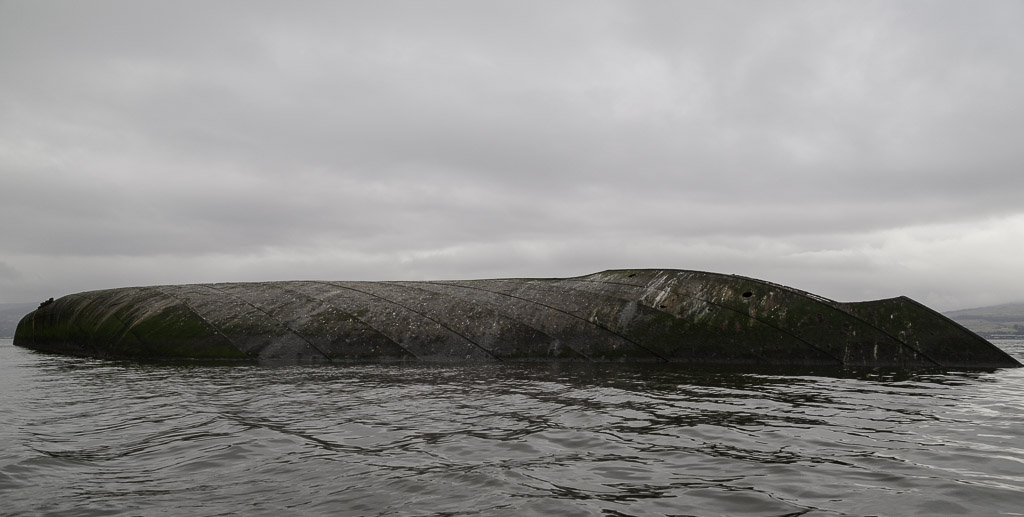 ...stern some 127.4m away. She looked like a dead, beached whale from this angle but there was no sign of the fatal rips in her hull. These are deep under water on her port side. Her beam was 17.1m and she was about 2/3 submerged when we were there, so there was about 11m of water. However even at chart datum, there is still 7m of water.

As the tide swirled the brown waters of the Clyde round the Sugar Boat's  hull, we thought of that stormy night when the Clyde's waters had never been sweeter.
Posted by Douglas Wilcox at 7:39 pm 4 comments: