Surf's up at the village on the beach. 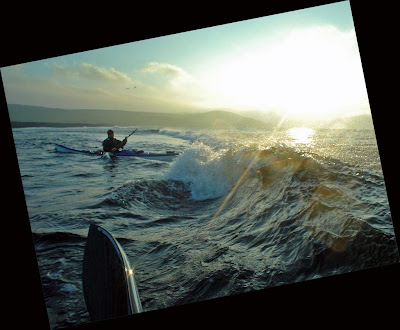 Yesterday the surf began to roll into the beach at Ballantrae in advance of today's depression. You can tell this is a surf beach, it's very steep and sand and shingle at the low water mark give way to large cobbles at the high water mark. It faces north west through the North Channel between Ireland and Scotland to the open Atlantic beyond.

I am sorry this photo is a bit squint, it was not very easy composing it. The dark brown appearance of the water is due to Galloway peat stained river water. The River Stinchar flows into the sea here.

The village of Ballantrae is built on a raised beach. This raised beach extends for many miles to the north and is broken only by occasional cliffs and headlands. Early cropping Ayrshire potatoes are grown in the fertile soil which is kept mild by the effects of the Gulf Stream.

The name Ballantrae is derived from the Gaelic "Baile an Traigh" or village on the beach. Fishing boats with the registration letters BA (for Ballantrae) are actually based in the shelter of Girvan harbour some 19km away to the NE. Ballantrae's inhabitants favoured farming rather than fishing. That should tell sea kayakers a little about what dumping surf conditions on Ballantrae beach might be like in inclement conditions. Beside the small car park, a simple sign says "Dangerous Bathing". Make sure you practice surf landings before launching at Ballantrae. If the surf gets up while you are out, expect a hard landing or face a long paddle to Lendalfoot which is the nearest sheltered bay, 9km away round Bennane Head and its tidal race.