A 40 foot sperm whale has died on the beach at Roseisle near Burghead in Morayshire in Scotland's North East. This is near where I spent my childhood and where both Cailean and my brother now live. Sperm whales are deep diving whales and prefer the deeper waters off the West coast of Scotland. The waters of the North Sea are relatively shallow and the whales are rarely seen in these waters. However, the RAF recently spotted a pod of nine whales (possibly sperms) not from where this sad corpse was found. Sperm whales are toothed whales and dive to depths of 300 metres to catch their favoured food, giant squid. Their record dives have been as deep as 3,000 metres. 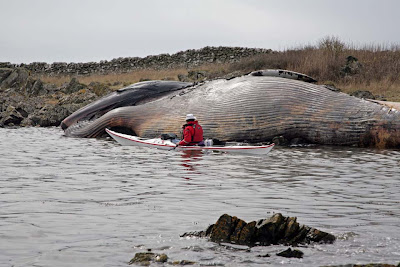 In Easter 2006 a 65.5 foot fin whale was trapped on the rocks at Barlocco reef on the Solway, (photo above). It came ashore at a high spring tide and was trapped on the razor sharp fangs of rock that characterise that part of the Solway Firth. Apparently it was 65.5 feet exactly as below the 65 foot size it would have been the responsibility of the local authority to dispose of. As it was found to be over 65 foot, it was the responsibility of the Scottish Executive. Fin whales are baleen whales and filter small organisms through great plates that hang down from their upper jaws. Its tongue was bigger than a Volvo estate car. It was humbling to paddle so close to this leviathan of the deep.

Recent research has discovered that sperm whales, fin whales, killer whales and humpback whales have spindle cells in the anterior cingulate cortex and the frontoinsular cortex spindle cells. Previously these cells had only been found in the brains of primates. In humans, these parts of the brain control emotional functions such as love, hurt, social organisation, empathy, speech, intuition and rapid "first impression" reactions.

Scotland used to be one of the most active whaling nations on earth. After we killed our own whales our whaling ships then scoured the seas of Antarctica for more prey. These whalers were brave men. My mother's great uncle was a west coast whaler who lost his life at sea. Today I am proud to live in a nation that has now chosen not to hunt these magnificent creatures.
Posted by Douglas Wilcox at 6:52 pm 5 comments: