My (very) small part in The Great British Story. 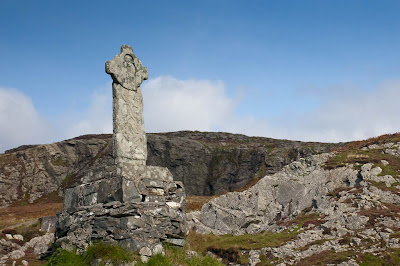 Tonight, the BBC broadcast the first episode of The Great British Story: a People's History. The first programme, Britannia, dealt with the period following the fall of the Roman Empire. Throughout the Dark Ages, civilisation clung on in the western fringes of Britain as the east coast was invaded by the Anglo Saxons. The programme followed the voyage of St Columba from Ireland to Iona off the west coast of Mull. He brought Christianity into the northern land of the Picts (who had never been part of the Roman Britain having been isolated  by first the Antonine, then the Hadrian walls).

St Columba had founded religious settlements on many of the islands he stopped at on his route north. The programme showed the ancient Celtic Christian carved stone crosses that still stand on the islands of Islay and Oronsay. Standing at the foot of these wonderful crosses, which are worn by the gales of 1,200 winters, is a humbling experience.

The above photo is of one of the crosses of Oronsay. It was shown for all of several seconds. I was quite pleased. It was one of mine!
Posted by Douglas Wilcox at 11:12 pm 2 comments:

Visiting the spirits of my ancestors.

Rounding Brown Head, we came to a green valley that ran into the hills. The south facing slopes make this one of the most fertile spots on Arran. The village is called Corriecravie.

Until  the 1860's, generations of my mother's family were crofters here. They farmed two fields, which still have the same boundaries today, though all evidence of the croft house has gone. My great, great, grandfather moved to Glasgow to start a new life in 1864. 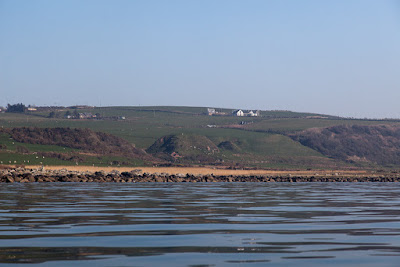 Corriecravie has a long history of settlement. The mound in the middle of this photo is Torr a' Chaisteal, the remains of an Iron Age dun. 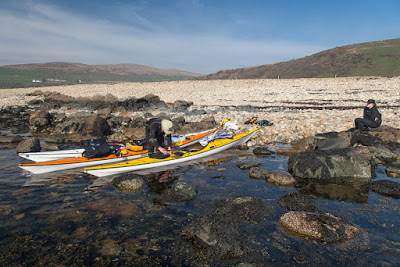 It was time for second luncheon in the land of my ancestors. 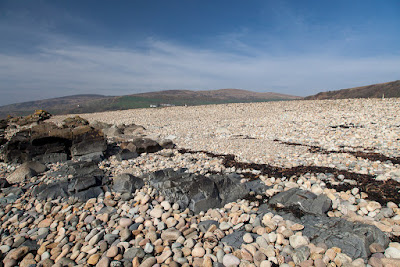 There is a story in my family about this beach. Many years ago, about 1800, there was an evening of music in the croft. At  the end of the evening one of my ancestors and a neighbour lit lanterns and escorted several of the older neighbours back to their houses near the shore. It was a stormy night but above the sound of the waves they all heard a slow intermittent tapping noise coming from the shore. Although they were very religious people, they were also very superstitious. Fearing an evil spirit in the darkness, they rushed back to the croft. The next morning when they finally ventured to the shore, they found a drowned sailor lying on the cobbled beach. He still had a rock clutched in his hand. He must have been too exhausted to cry for help and had tried to attract attention by tapping the rock...

On our visit all was calm and quiet and we felt at home.
Posted by Douglas Wilcox at 8:10 pm No comments: