A little bowed but still standing at Riasg Buidhe, Colonsay 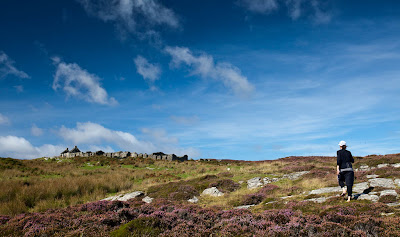 From the beach we made our way up the hillside to the abandoned village of Riasg Buidhe on Colonsay. 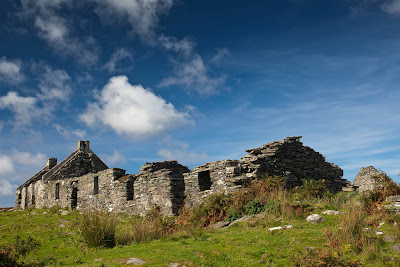 The street which had once been flagged with paving stones was now covered with grass. empty windows and doors looked out over the sea to Jura. The roofs of the houses were long gone. Only the first two houses had gables with stone chimneys. 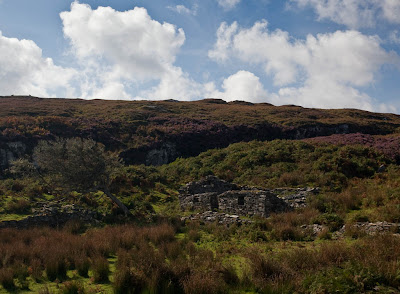 A little apart from the other houses, this cottage still had a tree growing at the bottom of its yard. 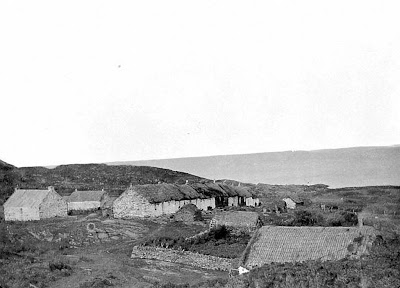 This view from 1900 was taken from the hill behind the cottage in my photo above. At this time the first two cottages in the main street had thatched roofs without stone chimneys. 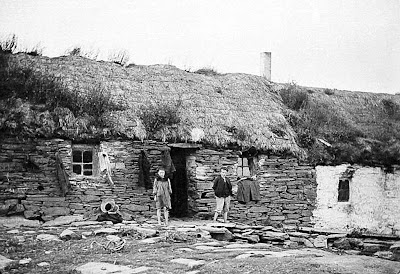 Some houses had plain dry stone walls like this one with children outside. 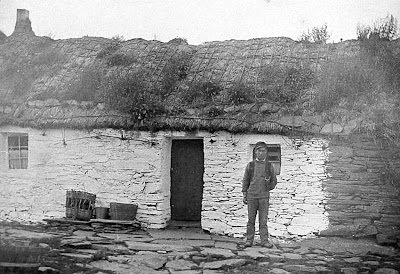 Others, like this one, were whitewashed. The prime occupation in the village was fishing. The village was abandoned in 1918 and the inhabitants were resettled at Glassard, which is near Colonsay's capital, Scalasaig. It reminded me of St Kilda, but unlike that island, little is published about the history of Riasg Buidhe. 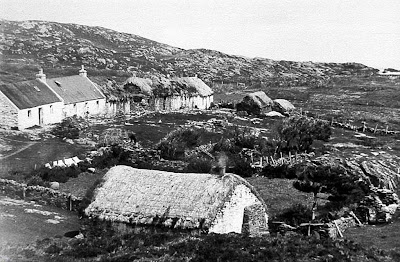 This photo was taken in 10 years later in 1910. You can see houses 1 and 2 now have corrugated iron roofs and the thatched roof of house 4 has collapsed. You can see a tree in the front yard of the isolated cottage in the foreground. If, as I suspect, it is the same tree we saw, it is a little bowed but still standing after 100 years!

As we made our way round Colonsay, we realised that we were landing at the same spots as our ancestors had chosen. They after all were also journeying by small craft. Some had lived relatively recently, such as the fisherfolk at Riasg Buidhe. We were shortly to discover where some had lived 9,000 years ago!

I think it is important when sea kayaking to keep a look out for landing sites. Don't just pass them by, on a headlong, headland to headland, dash. Take time to stop and explore, your voyage may take longer but you will be all the richer for it.


Bibliographic footnote:
The bottom photo was taken by by Mary Ethel Muir Donaldson (1876-1958). She published a number of books of photographs and writings including: 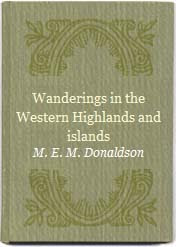 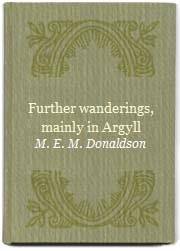