A bumpy crossing of the Sound of Arisaig. 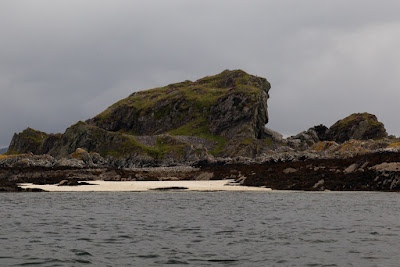 From Port nan Murrach, we pointed our bows to the east. We didn't bother exploring Port a' Bhathaich as it is a trap for most of the flotsam and jetsam in the area.  Instead, we cut across its mouth and slipped inside Eilean a' Ghaill. It has the remains of a vitrified Iron Age fort on its summit. There is a great view from the top but it is a very steep scramble and although it is only 23m high (and in 2004 I almost skipped up), I knew that as far as I was concerned it could now just as easily have been the Inaccessible Pinnacle on Sgurr Dearg in the Cuillin. 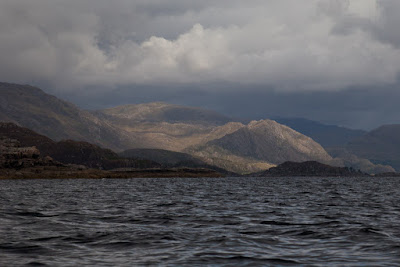 We now had  a choice, head up into Loch nam Uamh at the head of the Sound of Arisaig staying in the shelter of the lee of the Arisaig peninsula... 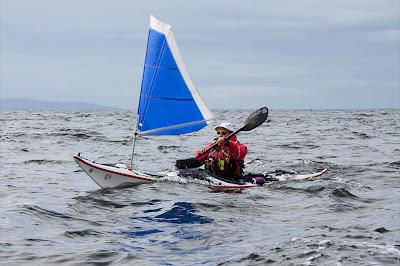 Photo by Donald Wilcox
...or head straight across the mouth of the Sound of Arisaig for the distant lands of Moidart. Well it was a no brainer, it was a broad reach on open water all the way to Moidart! At first the sea was nice and flat due to the shelter of Rubh Arisaig... 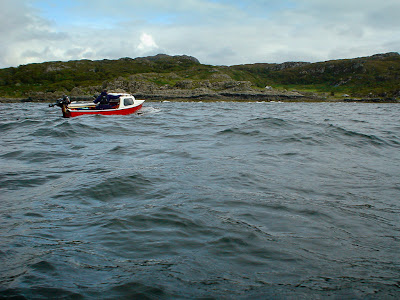 ...but it got a little bit bumpy on the crossing especially  as we approached the wind over spring tide conditions off Rubha Ghead a' Leighe.  Photography stopped until we were well down the Smirisary coast and the water flattened again as in the photo above. Smirisary was a crofting community that survived until the end of the Second World War when it was abandoned. Nowadays, many of the old crofts have been restored as holiday homes. 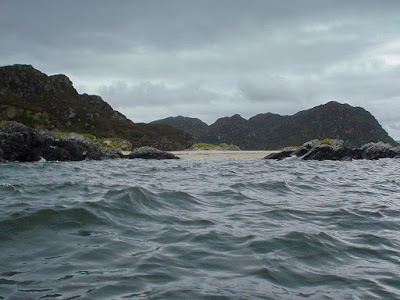 It was too rough to land on the rocky shore at Smirisary and anyway we still had a way to go before we could finally pull up the boats on another shell sand beach.
Posted by Douglas Wilcox at 7:00 am No comments: