Introduction
I have been testing the new P&H Scorpio mk2 MV since early summer for a test that will appear in the next issue of  Ocean Paddler magazine. During that time I have covered over 700km in all weathers, sea and tide states that this summer threw at us. The boat came with the optional P&H skudder which costs an extra £100. A lot of people have been asking what I thought of it so here goes. The only review I saw before I tried it was based on a few minutes paddling on a small lake. The tester was not particularly enamoured with it so perhaps I was not expecting too much from the Skudder. Sometimes that is a very good way to go into a test! 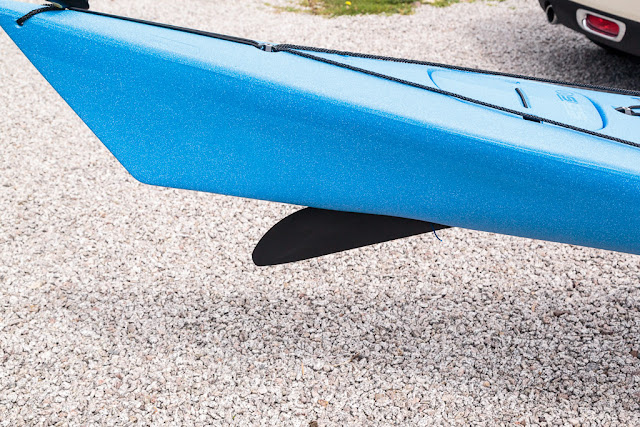 The Skudder is a combined rudder and skeg mounted in the usual skeg position. It has a decent sized blade to aid control. It is also considerably stiffer than the standard P&H skeg. This is it deployed in skeg mode. 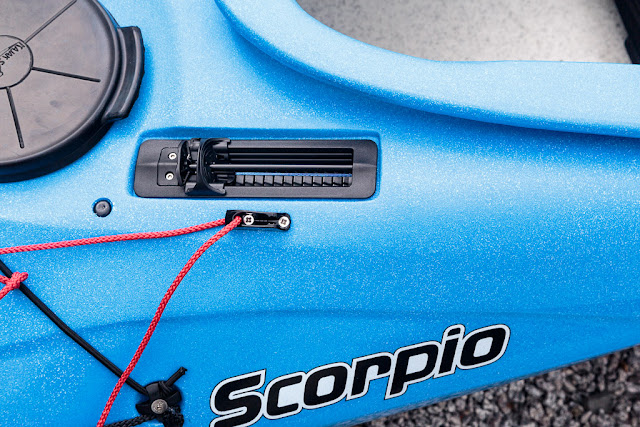 On the Scorpio mk2 the skeg/Skudder adjustment has been moved to the top of the cockpit. The Skudder acts as a skeg if you deploy the slider to just over half way back. 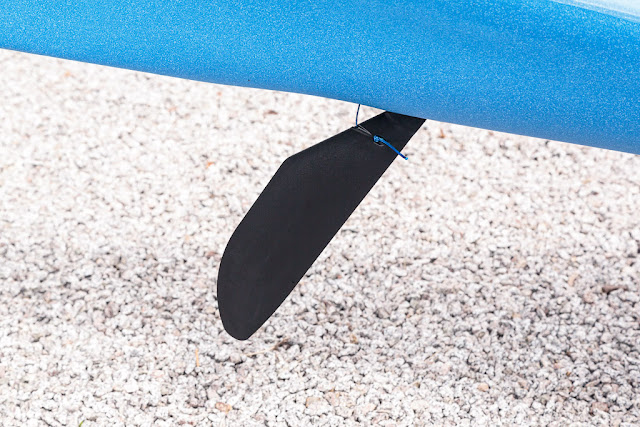 If you pull the adjuster right to the back the blade fully deploys and is free to turn in rudder mode. 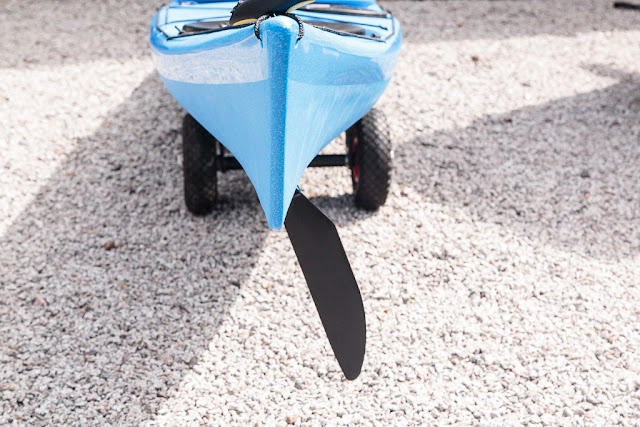 It is turned using the excellent self adjusting SmartTrack pedal system which is found on many ruddered boats these days. 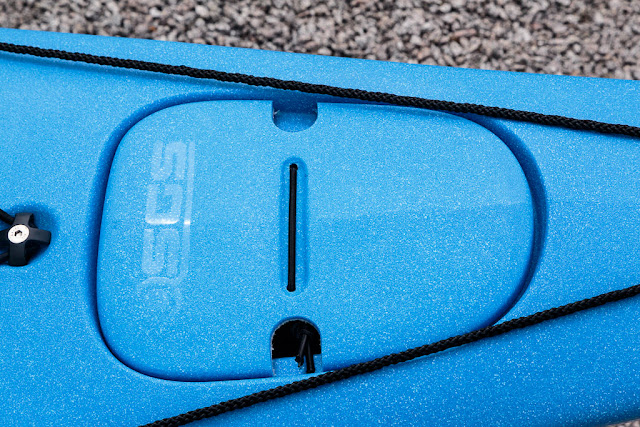 All the control cables are contained within the boat and the rear control lever over the rudder is covered by a flush plastic cover on the rear deck.  For a ruddered kayak the Skudder gives very clean and uncluttered lines. 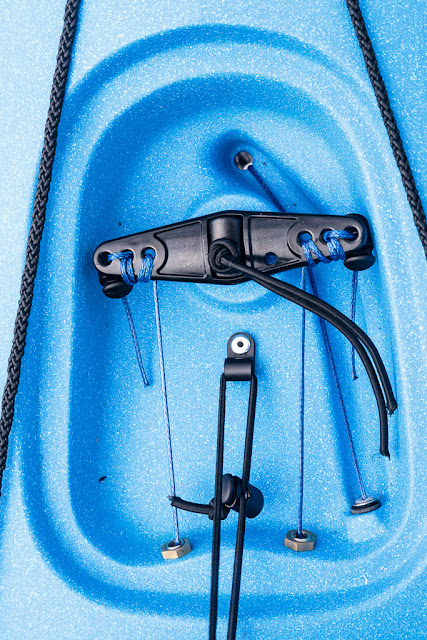 The cover protects the adjustment lever and cables from snagging. The rear hatch looses a little room compared with a simple skeg box but long thin items can still go up either side and had no trouble packing the boat for camping.

In use
I was not expecting a great deal from the Skudder in rudder mode. I was wrong and as the months on test went by, I found I was using the rudder mode more and more, even without the sail! It is not a panacea for manoeuvring a kayak but unlike some systems I have tried, it does have a big enough blade to be effective, even when paddling at 45 degrees to the wind (when some rudder systems are better lifted as they cause lee cocking if you cannot paddle fast enough). The 5* paddler felt there was no need for the rudder as the Scorpio MV was so manoeuvrable when edged. Initially I agreed but then I discovered that the Skudder works remarkably well for more advanced paddlers when used with edging and steering strokes. Then I noticed that two of the early intermediate paddlers had started to automatically edge the kayak when they were using the Skudder! The beginners loved it. 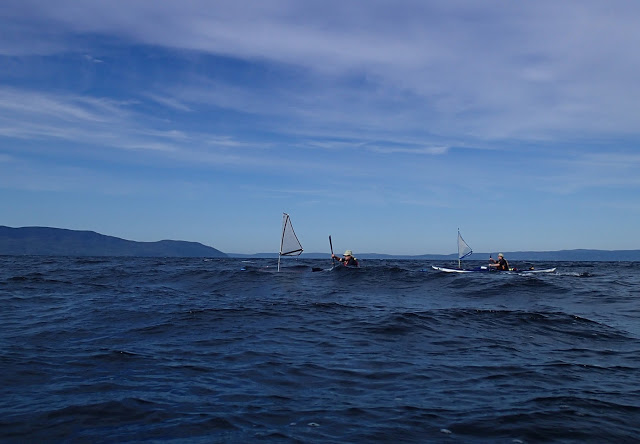 Photo Ian Johnton
When travelling fast downwind with the sail up, you need to be light footed with the Skudder. It is easy to steer too far one way then overcorrect the other. When paddle sailing downwind on an 11km crossing in F4 conditions with two paddle sailors in Cetus MVs, I found I was actually faster using the Skudder in skeg mode than rudder mode. In F4 winds the Skudder is big and effective enough to tack the Scorpio MV through the wind. Most other over stern ruddered kayaks I have used for paddle sailing in such winds are easier to tack if you lift the rudder first.

Any snags?
Well first of all it proved incredibly reliable and  It did not need any adjustment during the test. Unlike the more expensive Kar-itek skeg/rudder (which I have used over many years) it does not self centre as you lift it. This means you need to centre it with your feet first. Until you get used to this, do not leave it till the last minute before landing! 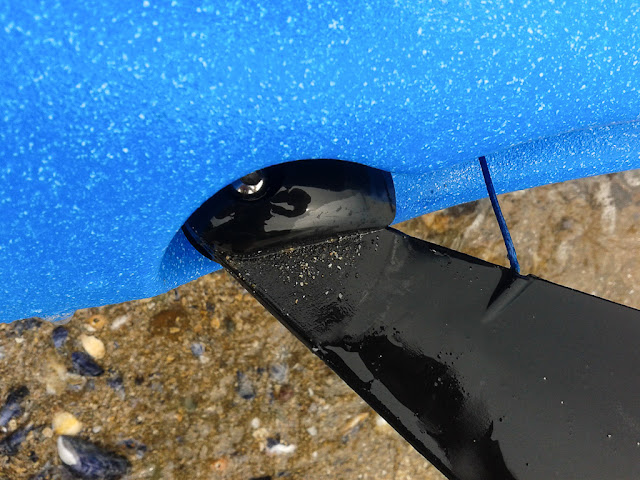 The only downside is that the pivot pin for the Skudder is in an exposed position at the front of the skeg box. The hinge is unaffected by pebbles, shingle, mud, or fine sand but some coarse shell sands (as found on the Outer Solway) can jam it and If the boat has been sitting on such sand you should make sure it is clear after launching but before getting into the boat.

Conclusions
Overall the Skudder grew on me to the extent that over the months on test I ended up using it most of the time! I got so used to it that when I first got back in my Aries 155 I was pushing the bulkhead with my toes every time I turned, trying to get the rudder to turn!  The Skudder is incredibly well designed and engineered, especially given the price of the boat it is fitted to. It works well in either skeg or rudder mode, indeed it is stiffer than the standard P&H skeg. Given the small price premium being asked I suggest that anyone buying a P&H boat that the Skudder is offered with would be mad not to give it a try.

Posted by Douglas Wilcox at 9:32 am 6 comments: