Kayaker in the water. 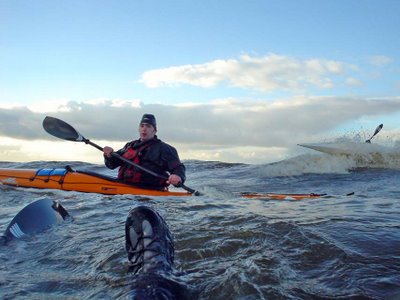 A lot of sea kayakers think they will never fall in because it has not yet happened to them. I suppose there is a sort of logic there, but the sea is an unpredictable mistress and if you go to her often enough...

Here is a shot of me enjoying a fine winter swim with Richard and Cailean coming to my rescue. Being dressed in a drysuit with thick fleece underneath, I was comfortable enough to carry on taking photos. 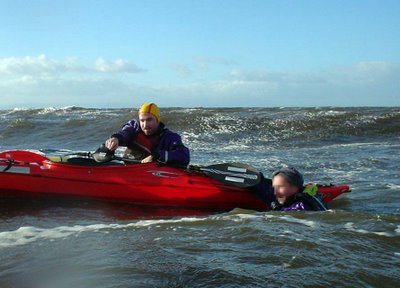 Cailean calmly directs the rescue of another swimmer.

However, recent reports of a sea kayak rescue on the BBC and Coastguard web sites highlighted another danger apart from cold: the possibility of separation from fellow paddlers and the boat. This particular incident had a happy ending because the paddlers were well dressed and had the means to raise the alarm. The helicopter and lifeboats rescued 4 swimmers who had become separated from the rest of their party in a tidal race.

It was wonderful that this potentially serious event had a happy ending, thanks to the preparation of the kayakers and the skill of the rescuers. It makes you think though. If you got separated from your friends and your boat, would you be able to summon help and survive until it arrived? 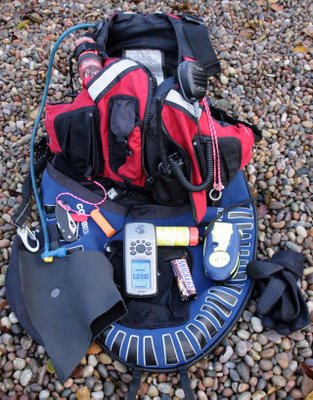 If I was in this nightmare scenario, this is the gear I would find in my BA and spray deck pockets. From the top: combined torch and strobe, drinking bladder, external speaker mike for the waterproof VHF in the BA pocket, in the other pocket is my waterproof mobile phone, noseclip, ACR GPS EPIRB satellite distress beacon, neoprene gloves, chocolate bar, day/night flare, GPS unit with Lat/Long set to BIG text, whistle, knife, neoprene hood, cow's tail with snap link. I have been criticised for the cow's tail but the way I see it, it would keep me attached to the boat if I was too cold and tired to hold on. If I was in the water with another paddler, it would keep us together. I would not use it in surf near the shore.

I think I would prefer to have a polythene Nordkapp RM and an EPIRB rather than a carbon?kevlar Nordkapp.

Be safe out there.
Posted by Douglas Wilcox at 5:43 pm 10 comments: