The leaning chapel of Inch Kenneth. 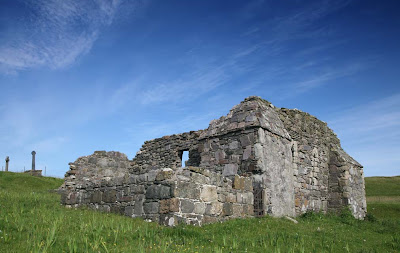 The little chapel on Inch Kenneth dates from the 13th century. Its leaning east wall was supported by buttresses added in the 16th or 17th centuries. Inch Kenneth had been an important ecclesiastical site since St Cainnech, who was a friend of St Columba, established a outpost from Iona here in the 6th century. 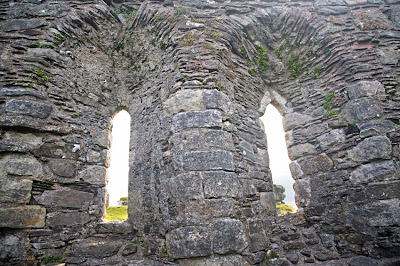 The chapel must have been a site of some importance. Its 700 year old windows, which face to the east, are really rather fine.

Nowadays the interior of the west wall supports 8 upended mediaeval family grave slabs which are from the Iona school of sculpture which existed in the 13th and 14th centuries.

The chapel was roofless even in Johnson and Boswell’s time and the open interior has long been used as a burial place. On a similar morning to ours, Boswell discovered several human bones within its walls. “I this morning got a spade and dug a little grave in the floor of the chapel, in which I buried what loose bones were there.” He must have done a thorough job as we found none, not even a metatarsal.
Posted by Douglas Wilcox at 8:03 pm No comments: