Some long views from Ailsa Craig.

On previous visits to Ailsa Craig we have gone in a high pressure system and the visibility has been poor due to haze. On this occasion, the atmosphere was crystal clear. To the ESE Girvan was very clear but in the middle of the photo, the summit of the Merrick was hidden in the clouds. The dip to the right of the photo is Glen Trool.

The view to the S showed Stranraer at the head of Loch Ryan with the Rhins of Galloway and its wind farm on the right. 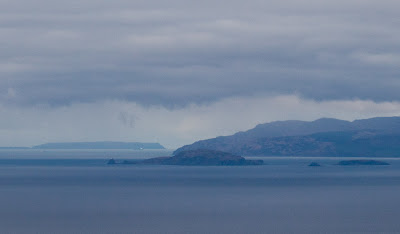 A telephoto view to the W showed Sanda Island with the Mull of Kintyre behind. In the distance, flat topped Rathlin Island is 68km away off the north coast of Ireland, on the far side of the North Channel.

To the north, this view shows little Pladda Island (with its lighthouse) off the south coast of Arran and the pointed peak of Holy Island to the east of Arran. Right of Holy Island the view is all the way up the Firth of Clyde to the white villas of Dunoon. Beyond that, the snow streaked peaks are Ben Ime, The Cobbler and Ben Narnain in the Arrochar Alps. Ben Ime is 112km away. To the right of Dunoon, the dark island is the Little Cumbrae. To its right you can just make out the chimney of the Inverkip power station. The snowy mountain at the right edge of the photo is Ben Lomond.

Alan (see comments) asked "could I ask if you have a higher resolution photo of the Arrochar Alps, or was this photo already cropped?" This is the highest resolution I have with a 1:1 pixel ratio. It was a remarkably clear day. To the left of Ben Ime, which is the highest point on the horizon, you can see the dark slopes of Beinn Dubh Craig then to its left, the snow flecked ridge of Ben Oss. Lastly, to the left of Ben Oss, you can just see the fine peak of Ben Lui rising above a nearer flat topped ridge. Ben Lui is 1130m high and is 130km from Ailsa Craig, a long view indeed!

Although they don't show up well  on these low resolution photographs, we were surprised by the number of wind farms that had sprouted on the hills all round us. This regularly updated kmz file from weatherman22 will open in Google Earth and show the number of opened and proposed wind farms in the Scottish hills and mountains. 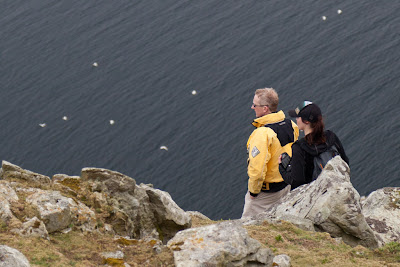 It was now time to make our way back down the steep path to the kayaks.
Posted by Douglas Wilcox at 10:15 am 2 comments: