Southern exposure round the Mull of Galloway. 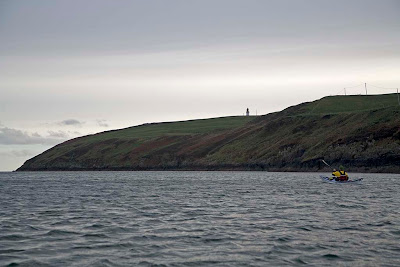 The Mull of Galloway is a bold headland which juts out into the North Channel of the Irish Sea. It is Scotland's most southerly point. It is a magnet for sea kayakers due to its notorious nine tides!

Tony and I set off from the East Tarbet of the Mull of Galloway 2hrs and 30mins before the end of the east going flood. We planned to use a west flowing eddy that runs close into the cliffs. Unfortunately this eddy does not run round each of the many headlands on the Mull and we were prepared to battle round these into the teeth of the east going flood. The freshening SW wind began to make its presence felt. Cats' paws spread out on the water as the wind dropped over the cliffs.

We soon picked up an east going eddy which runs along the north coast of the Mull. It carried us effortlessly to the east point of the Mull. 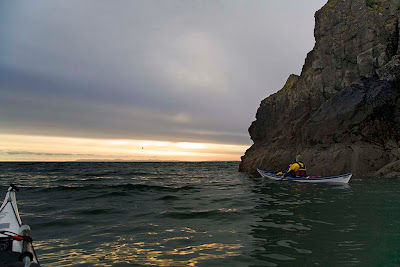 Here in the shelter from the wind, and out of sight of the race, we enjoyed a calm moment enjoying a view of the Isle of Man. Calm was not a word we would use again on this trip! 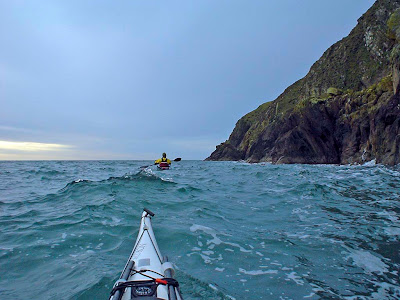 As we worked our way round the corner, the water became livelier... 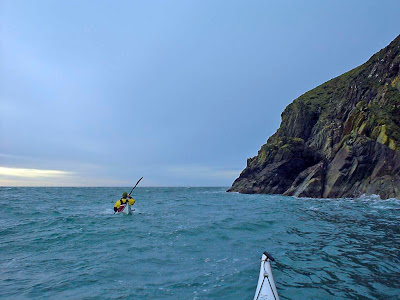 ... and the wind began to increase. 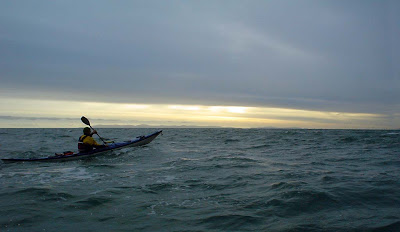 This photo was taken in the last of the calm water before we entered the race. The water then got a bit rough and I found myself quite unable to take further photographs....

We were in the disturbed water from below the lighthouse to the entrance of West Tarbet bay. Most of the waves were only about 5 feet, crest to trough, but they were short, steep, breaking, very irregular and coming at us from all angles.

As the wind shrieks round their jagged ramparts and as the surf thunders at their base, no one can hear your screams far below the cliffs of the Mull of Galloway!

Close to the rocks the clapotis was fearsome but the tide was less strong. After being side surfed by several waves we kept away from the rocks as much as we could. As a result we found ourselves in the stronger adverse current further out. It took 40 minutes from the east to the west points of the Mull. It is only 2.5km so we actually managed to average 3.75km/hr. It really was sustained maximum effort all the way. The worst bit was 1.5km to the west of the lighthouse. My GPS showed I was going backwards at 1km/hr on several occasions before I got round that one! The maximum speed I hit was 14.5km/hr (while still paddling) in the eddy to the south of the lighthouse.

The wind was still increasing and any thoughts of continuing up the west coast to Port Logan were abandoned. We made for the shelter of West Tarbet Bay and prepared ourselves for a Viking style portage over the Tarbet ...