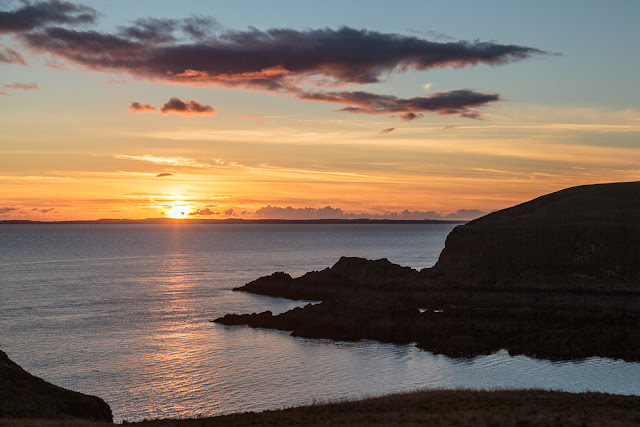 By the time we set up camp on Little Ross Island, the sun was already setting across the broad expanse of Wigton Bay. 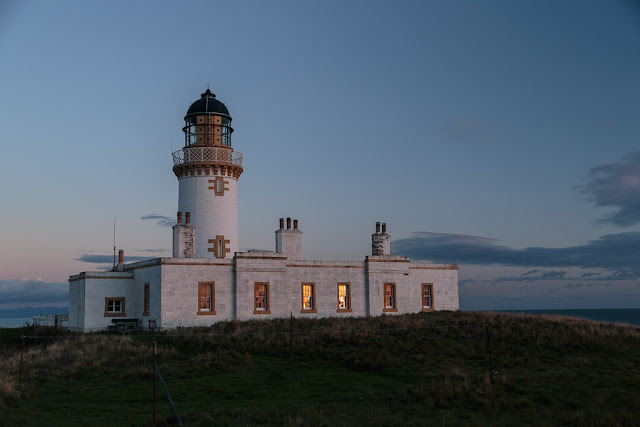 We walked up to the lighthouse  as the last rays of the sun reflected on... 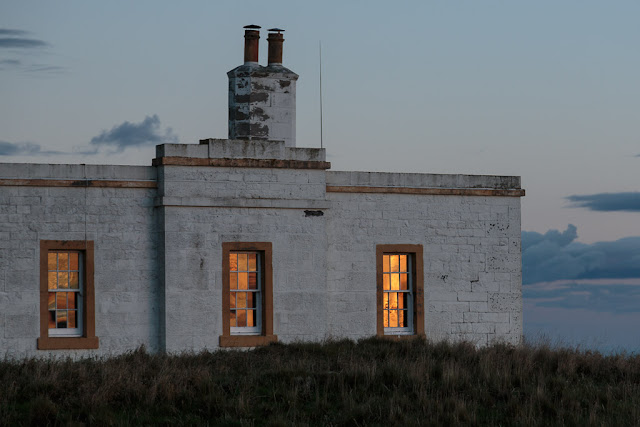 ...the windows of the lighthouse keepers' cottages. It was behind... 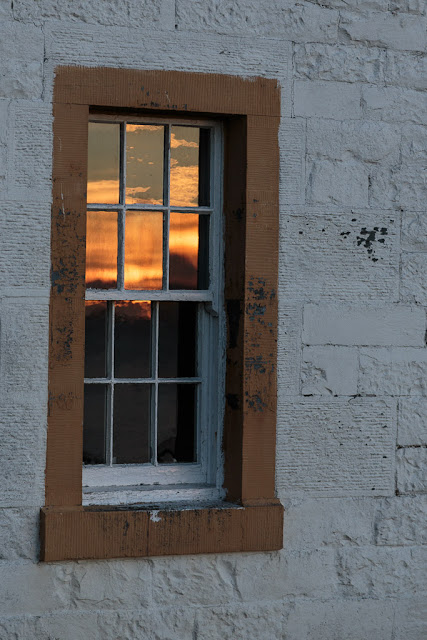 ...this window that the dark events of Little Ross Island's past were played out in 1960. The lighthouse keeper was shot in the head by the assistant lighthouse keeper who was later arrested in Yorkshire. He was found guilty at his trial in Kirkcudbright. There is a moving account of the tragedy by local man David Collin who found the body with his father. 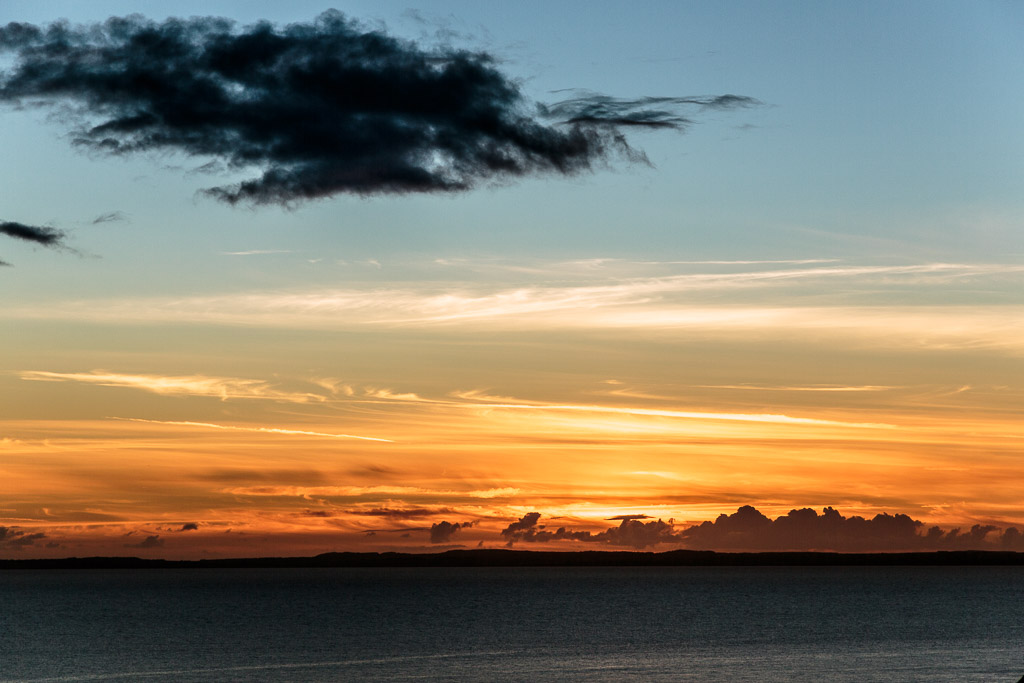 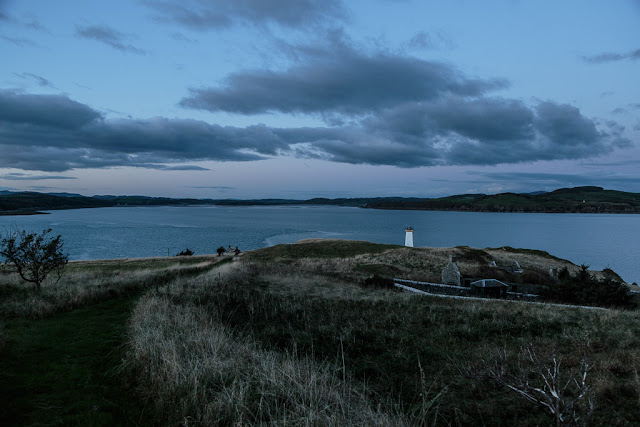 ...as we walked back down to our camp in the gathering darkness it was hard to believe that such a sad event had taken place in this beautiful spot. Several sea kayaking friends refuse to camp here. You might wonder if we were concerned about camping in such a place but there was no sense of malevolence, only a feeling of peace. We could think of no reason why any spirit of a murdered lighthouse keeper could hold any ill will towards mariners like ourselves. 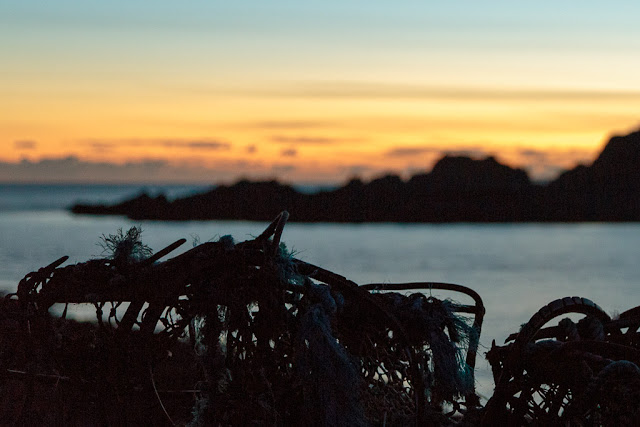 As the last embers of the day faded behind a pile of old lobster creels, we gathered what scant driftwood was to be found. We would need a fire as a chilling F4/5 northerly wind got up as... 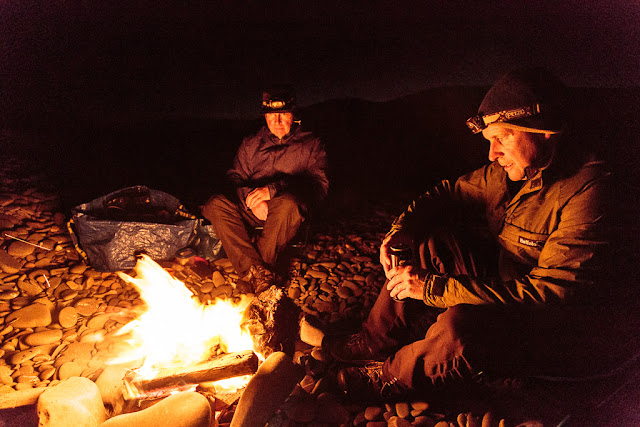 ...night fell. Fortunately we had brought a good supply of logs in dry bags on our rear decks and soon enjoyed the warmth of a blazing fire, (Carrying the logs meant we had left our trolleys behind. This omission would warm us further the following evening...) We spent several hours enjoying great chat while we ate baked sweet potatoes washed down by an isotonic drink (which is good for you) and is made by an Irish company.

I was woken in the middle of the night. The flood tide in the Sound was running against the north wind and it sounded as if the waves of the tide race were lapping the tent. Although we had carried them well up the beach, I was worried about the boats so I got up and used my tow line to tie them together and secure them to a rock. Suddenly a dreadful noise, like a pair of cats being strangled, reverberated round the island. The hairs on the back of my neck stood up but it was no ghost, just a pair of squabbling herons.

Read more  about the sunset at Little Ross Island on Ian's blog here.
Posted by Douglas Wilcox at 9:46 am