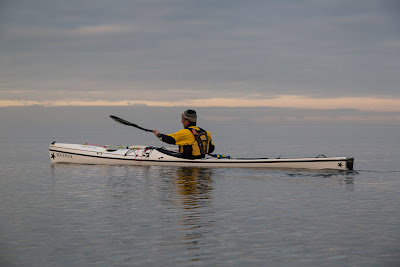 Up until now we had looked at the Taran 16's performance from the point of view of travelling as fast as possible both with and without a sail. For this next  part of the test, we wanted to assess the Taran's practicality and suitability as a general day touring kayak. Two of us set off at dawn (one in the Taran 16 and one in a Cetus MV) and paddled south until the sun was at is peak in the sky. Then we switched kayaks and turned back arriving at our launch spot at nightfall.

You can read our findings at the original review page which has been updated. Discussing the day, Phil said the Taran 16 is faster than my Quest, more manoeuvrable than the Quest and more ergonomic than the Quest. It also has just as much space (more when you consider it has no skeg box). It was also significantly faster than the Cetus MV (my current favourite all round kayak). I think anyone in the market for a composite touring kayak should test paddle a Taran 16, with an open mind. Don't view it as a simple speed machine, don't think that a touring kayak has to vaguely resemble a traditional Greenland kayak to be any good... just go out and paddle it. You will find that it does not just go fast, it is also manoeuvrable and comfortable and no more difficult to paddle than any other kayak. Whatever else it is, the Taran 16 is also an ideal touring kayak.
Posted by Douglas Wilcox at 11:53 am