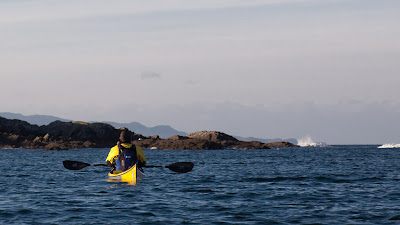 In a recent post I said that we came to a point round which some big swell "stopped play". While this was accurate, I was being rather economical with all the facts of the case. This was because I wanted to let Ian tell his story first.

Ian and I had been rockhopping along the coast, leap frogging past each other and watching out for each other. Ian capsized at the point above, right where that swell is breaking. I had approached the point in the lead but had kept a fairly wide berth as I had seen occasional boomers breaking on the point and I didn't much like the look of the gently shelving rocks. 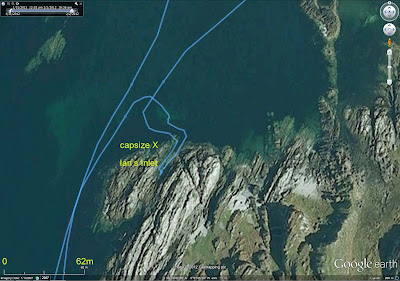 When Ian approached, all was calm and he decided to nose into the small gully marked X and hold station (his bow pointing SW) in the small swell. He hadn't reckoned on the set of four big ones that were just about to arrive. At 11:27 the first washed him up the wall of the gully. He braced but as it sucked back, there was nothing to brace on and he was dragged head first down the barnacle covered rocks. The second wave bashed him and his kayak back up the rocks and Ian bailed out. The third wave separated Ian from his kayak and his paddle as he struggled to maintain contact with the rocks. The fourth wave was fortunately the biggest. It flung Ian's kayak back up the rock with a real graunching. The bow caught a rock and the force of the wave catapulted the stern right round so the bow was now pointing NE. The wave then carried the kayak and Ian over the rocks into the inlet behind.

I then nipped into the inlet, picking up Ian's paddle and one of his splits on the way. Ian was in the water trying to pump out the kayak but with me alongside, we turned the kayak upside down and drained it. The inlet was barely wide enough for two kayaks and the swell was pushing us back and forwards, crashing into the sides of the inlet. My right elbow took a heavy blow, with the momentum of two kayaks and kayakers  behind it. At this point, we both decided that I would be better out the way and give Ian more room to try a cowboy re-entry. I reversed out a bit and got my contact tow rope ready to pull him and the kayak out of the gully, in case the re-entry failed. Ian managed the cowbow in fine style and we reconvened about 25m offshore. We rafted up and Ian pumped out while I re-secured his splits and recovered his pump. Ian recovered his map case. 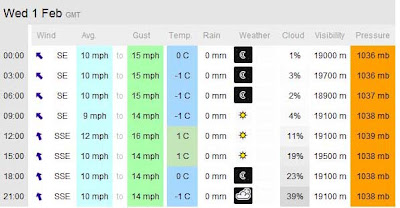 There was a freezing cold SE wind blowing about force 4. Despite this we paddled on as if nothing had happened at 11:36, just 9 minutes after Ian had capsized. (When we landed at 11:52 my anemometer was showing 14-15 knots on top of a sand dune with an air temperature of 0C and a wind chill of -6C.)

A major incident had been averted because:

Firstly, Ian was wearing a dry suit. His Lomo Renegade drysuit resisted the abrasion of the barnacles with flying colours. If Ian had being wearing a two piece he would have been frozen and the trip would have had to be abandoned.

Secondly, Ian had practised cowboy re-entries in rough conditions. If the cowboy had failed, I would have towed him out (I have practised towing backwards.) I could have used either my full tow line or, more probably, my short contact tow line, which I keep on the fore deck. Out in calmer water, I would have rafted his kayak and he would have done an assisted re-entry.

Thirdly, Ian had the benefit of consuming 500ml of my hot, home made French onion soup.

From this point forward let this inlet be known as Ian's inlet!