The ground was moving and it was nothing to do with the Laphroig! 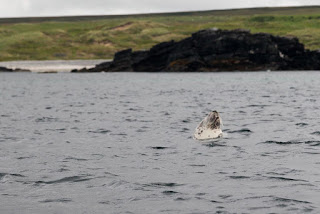 I am afraid I have not a single photo of our paddle under the cliffs between Cape Fear and of Ton Mhor at the north end of the wild Rinns of Islay. After closing with the rocks we got out of the worst of the counter tide race but the clapotits proved to be somewhat of a challenge to tiring paddlers. It was like hanging onto a bucking bronco! We felt some relief when we eventually turned the corner into the sheltered waters of the east side of Ton Mhor. We were not the only ones to be tired, this large seal was fast asleep! 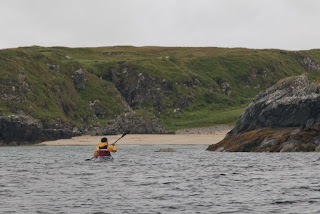 We now made for the lovely sands of Port Gillhe Greamhair. 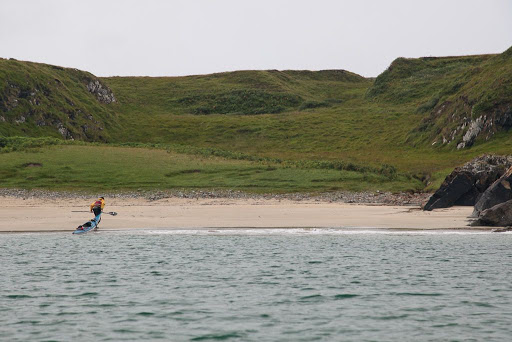 There was hardly a ripple of surf, unlike the time when Phil and I had turned back from here only 6 weeks previously. 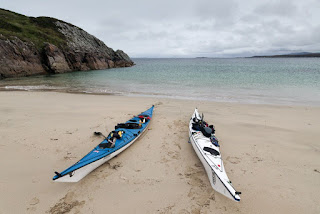 I stagerred out of my kayak, I could hardly stand, my knee had seized up after 25 km of some of the most challenging kayaking on the west coast. 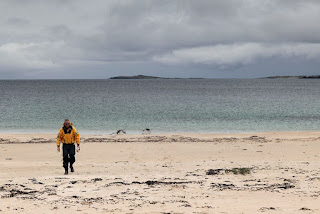 After enjoying our sandwiches on the machair at the back of the beach, we decided to have a little celebration. In his recent comment Ian said: "Character building stuff Douglas! I trust a moderate amount of strong drink was taken in order to calm the nerves after this passage? I should have thought it would require an 18 yr old to really do the trick...."

Ian knows me too well! I had some 18 year old Laphroig in my day hatch and Tony kindly went back down the beach for it. As we lay back on the machair for a well deserved rest and snifter of the spirit of Islay, the ground seemed to to be moving beneath us, as if we were still paddling a stormy sea. I can assure you it was it was nothing to do with the Laphroig!
Posted by Douglas Wilcox at 7:00 am