Retreat from Islay, the mysterious case of the disappearing headland. 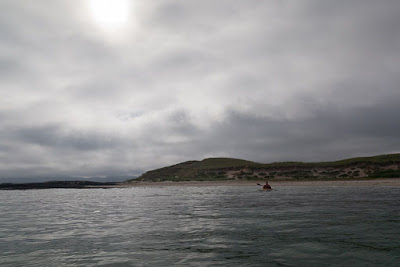 I slept poorly, partly due to the pain in my knee and partly due to unease about the day to come. I awoke early to the crash of surf on the offshore reefs. It sounded so close that I feared for the kayaks but when I stuck my head out of the tent there were only small waves making it onto our beach and the kayaks were safe. It was a relief to retreat from the chill, grey light of dawn back to the warm sleeping bag.

The morning was dull with thick low cloud. We planned to take the south going tide down the west coast of Islay and either camp at Lossit Bay or carry on round the Rhinns of Islay (at slack water) and into Loch Indaal, if there was too much surf to risk landing at Lossit. 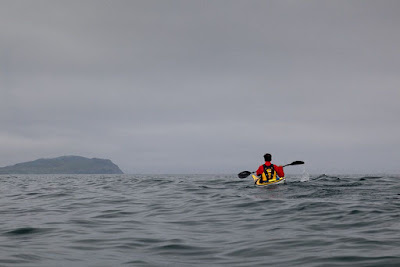 At first there was only a gentle rise and fall over the small swell that made it past the reefs. Our first destination, Ton Mhor, dominated the horizon to the south west. It marked the start of the Rhinns of Islay. 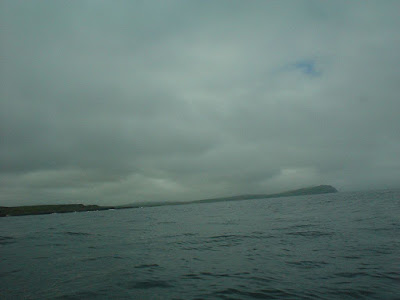 As we emerged from the shelter of the reefs the swell began to increase... 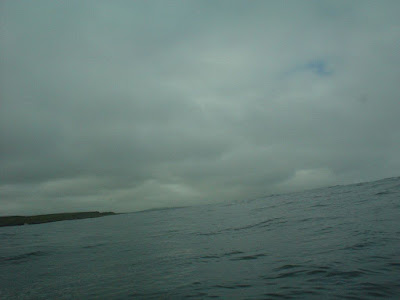 ...until even the great bulk of Ton Mhor disappeared when we were in the troughs. From the crests I could see the spray hanging heavy in the air above the surf beaches at Sanaigmore and Ton Mhor. They were on the sheltered side of the Rhinns, so I knew it was pointless to go on. I had checked the Magicseaweed surf report for Machir Bay before we left and it was predicting 4 foot surf. Later forecasts had updated the prediction to 9 foot surf but we were not to to know that.
At first Phil was surprised when I said we should turn back. After all, there was hardly a breath of wind in the air. However, he understood completely when I told him what a landing in large surf would be like. I made my decision early because the tide was pushing us strongly towards Ton Mhor. We had been paddling for only one hour when we turned back. Against the tide, it took considerably longer to get back to where we had camped the night before. If I had left the decision too late, the tide would have swept us round Ton Mhor and we would have been committed to paddling down the west coast of the Rhinns and the uncertainty of finding anywhere to land. 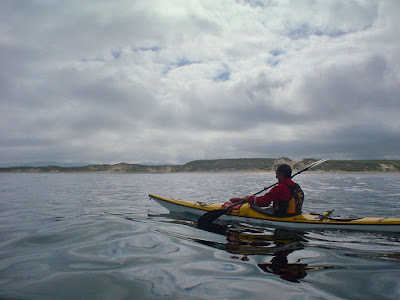 Instead, we were soon back within the shelter of the reefs and looking for somewhere to enjoy a second breakfast. Yes, I am first to admit it, we practice seakayaking lite!
Posted by Douglas Wilcox at 9:45 pm