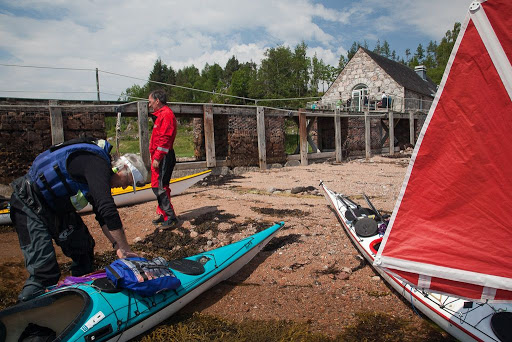 It always amuses me when I see people packing food and drink for their first sea kayaking expedition to Scotland's wonderful west coast. They imagine that such a magnificent, primeval landscape will be as a desert, with little opportunity for resupply or refreshment. But in truth, there chinks in the landscape's armour, little oases, like this one at Kingairloch at the head of Loch a' Choire. This is an apparently insignificant offshoot, into the lands of Morvern, from the 55km length of Loch Linnhe.

David, Phil and I (sadly Jim is no longer with us) have a reputation as light packers yet also as bon vivants, which are apparently contradictory states of sea kayak being. It was shortly after midday when we drew up at the old Victorian Boathouse at Kingairloch Estate in Morvern, which is a wild and remote peninsula deep in Lochaber. 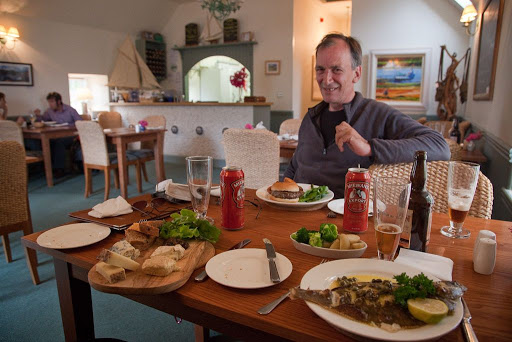 There are no draught beers but the fridge was full of a fine selection of bottled and canned beers and white wines. I enjoyed a bottle or two of some excellent ale from the island of Arran. For our other victuals, Phil chose a local venison burger with fat chips. The venison was almost completely fat free and was aromatic with the heather from the Morven hills upon which the deer had grazed. David enjoyed two starters, a daily special of a terrine of smoked haddock pate with home made bread and a huge cheeseboard, which Phil and I had to help him with. I enjoyed the daily special of a whole plaice cooked in capers with vegetables from the estate garden.

As sea kayakers, we are athletes whose bodies are honed by years of hard expeditioning and as such, they require to be treated like temples. The sad thing is that the "headland to headland" sea kayaking sect (we are a very broad church) would not even notice Loch a' Choire, never mind what lay hidden deep within. Well that is their loss, while they might have battled the midday thermal winds, before dining on an energy bar at the foot of some distant headland, David, Phil and I washed our excellent meal down with some fine filtered coffee. We did however, make a prompt point of being back on the water before three in the afternoon. 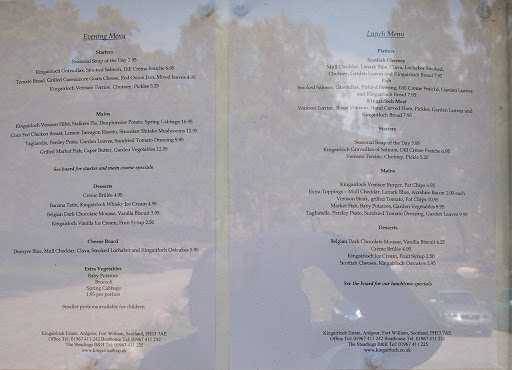 There is free WiFi and the toilets were spotless. Sadly the showers are no longer available, due to lack of demand, so if you visit, ask about showers!

Though not strictly a pub, this is a proper restaurant, we were highly satisfied by our visit. Overall it would seem stingy to give a score of any less than 12/10.
Posted by Douglas Wilcox at 10:22 pm