A decent burial, in Glen Coe 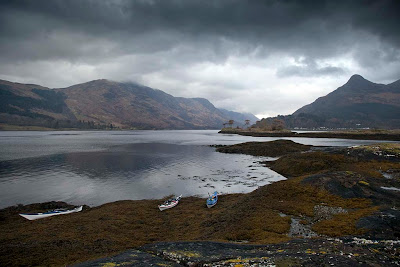 We landed on Eilean Munde, Glen Coe's Isle of the Dead, under leaden grey skies. 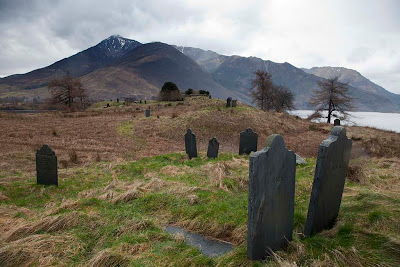 There are graves of Stewarts, McInnesses, MacDonalds and Camerons. Even when the clans were in conflict, Eilean Munde was seen as neutral territory and the island is where warring clansmen were laid beside each other in death.

It is said that McIain, chief of the Glen Coe MacDonalds was buried here after the infamous massacre in 1692. It was planned as a premeditated murder of an entire clan by Campbell of Glen Lyon, who was on the Government side. At the time, the clans had been warring for hundreds of years and the MacDonalds were no saints, having just three years before, laid waste to the crofts and stolen the cattle from Glen Lyon on their way back from the Battle of Killiecrankie. The Massacre of Glen Coe attracted widespread loathing and condemnation throughout Scotland because Campbell of Glen Lyon and 128 of his men had being staying in Glen Coe as guests of MacIain for the previous 11 nights.

About 400 people lived in the Glen at that time. 38 men, including MacIain, were murdered and a further 40 women and children later died during a blizzard on the hills as they attempted to escape. However, over three quarters of the clan escaped, some to friends in Campbell lands in Etive. Some of the Campbell solders were so disgusted at this planned "murder in trust" that they forewarned their hosts. Two were lieutenants, Francis Farquhar and Gilbert Kennedy. They were arrested and imprisoned for disobeying orders. 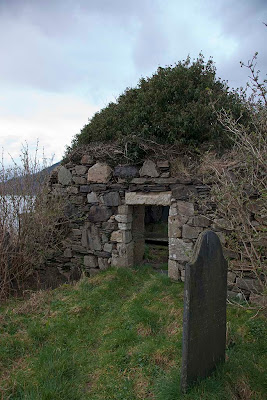 At the crest of the island there is a ruined chapel. Its predecessor was built built in wood by St. Fintan Mundus, who came here from Iona in the 7th Century. 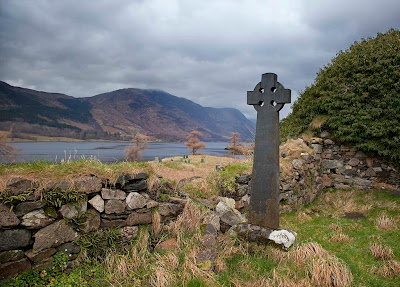 It was was burnt down in 1495 and the present stone structure dates from the 16th century. The last service took place in 1653. 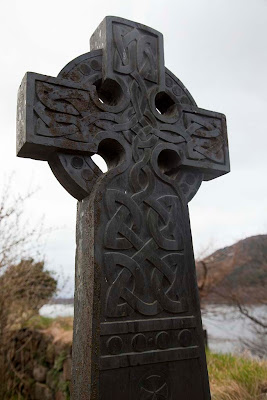 Many of the monuments and gravestones are carved from local Ballachulish slate, like this magnificent Celtic cross. 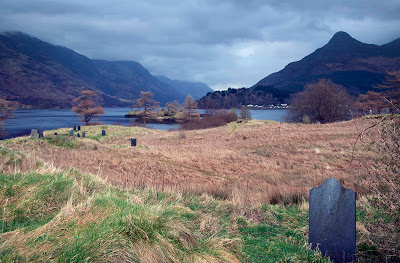 One Stewart, James of the Glen, was not fortunate enough to be buried in this peaceful spot. Colin Campbell of Glenure was the Government Factor and he took it upon himself to evict Stewarts from their crofts and install Campbells in their place. In 1753 Campbell and his henchmen crossed into Appin by the Ballachulish ferry. They were on their way to evict more Stewarts, when he was shot in the back by an unseen marksman. The "Appin Murder" so outraged the Campbells that they took James of the Glen, the first Stewart that they found, to Inverary Castle. Here their Chief, the Duke of Argyll, sat with 11 Campbell jurors and sentenced James to death, despite having not a shred of evidence. James was hanged at South Ballachulish and his body was left chained to the gibbet until it fell to pieces.

Much as we had enjoyed our visit to this interesting place, we counted ourselves lucky to have a save passage home from Eilean Munde.

P.S. If you are a Campbell, and you are thirsty or need a bed for the night in Glen Coe, it's probably best to adopt a pseudonym, such as Smith. The Clachaig Inn, at the mouth of the Glen, still displays a sign "No hawkers or Campbells". For a neutral account of this emotive part of Scottish history see "Glencoe and the End of the Highland War" by Paul Hopkins.