End of the road: the Mull of Galloway tide race. 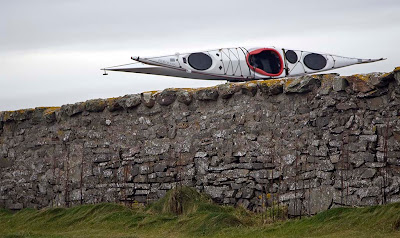 After we reloaded the kayaks onto the car, we drove to the road end at the Mull of Galloway, the southernmost tip of Scotland. 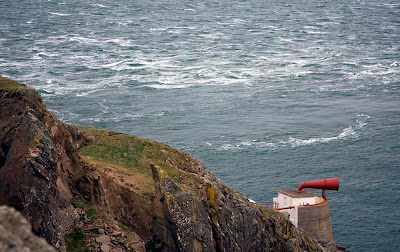 Looking east on the spring ebb tide you can see the main race comes very close to the east end of the Mull but it then heads SW, out to sea, leaving most of the cliffs below the Mull standing in a relatively flat eddy. 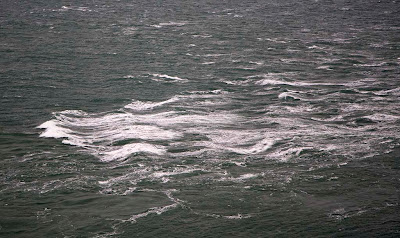 This is the spring ebb race running against a force 4 to 6 SW wind. 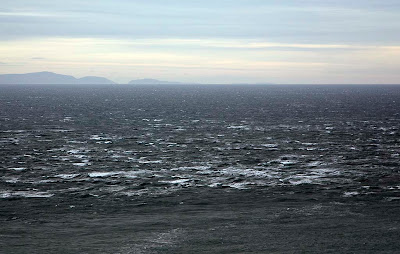 Looking south towards the Isle of Man over the ebb race. 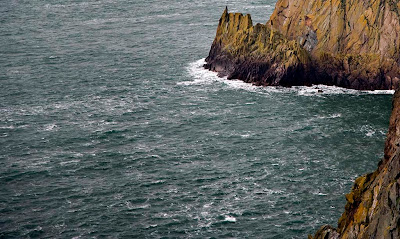 Looking west, the ebb race is well offshore...but the water round Gallie Craig is not exactly flat. 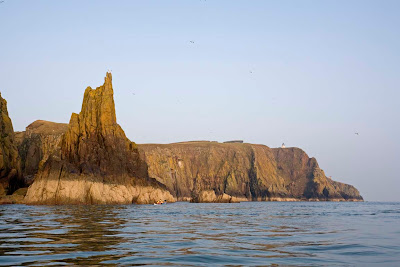 To give an idea of the scale this is Gallie Craig from the sea looking east towards the lighthouse! (17/02/2008) 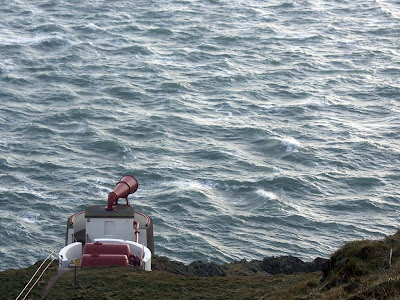 The above photos show the ebb race. The flood race come much closer to the cliffs than the ebb. We went through against the flood tide, 2 hours from slack water at springs. This photo (in a similar wind to that which we experienced) shows the water state below the fog horn, 2 hours from slack water at neaps. It gives an idea of what we met. We found more broken water and the conditions persisted without a break for 2km! To give some idea of scale, the photo was taken from a height of 71m. (28/12/06) 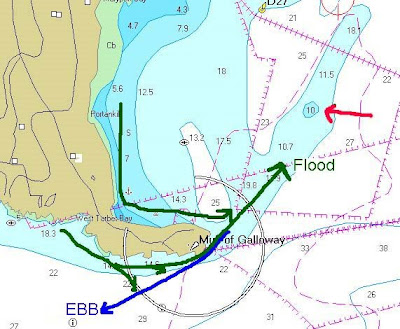 Going east to west, on the west going ebb you have only a short 100m or so of race to cross at the east end of the Mull. After this you enter a large relatively flat eddy which extends right to the west end of the Mull and beyond.

Going east to west on an east going flood as we did, even in close to the rocks, you are much closer to the main race. From the light house you have to fight adverse currents at each headland. The red arrow highlights a submarine reef which throws up standing waves especially on the flood.

What a fun place! No wonder several legends attach to this place.....

PS Of course most people would have driven up to the road end at the top of the cliffs and looked at the race before they paddled it. Many would have decided that one look was enough! The trick with this type of paddling is not to look first! We didn't, but of course I am not recommending this ostrich type of approach to planning sea kayaking expeditions! In truth I knew exactly what it would look like as I have gazed down on the race in many different conditions but not paddled it afterwards.