Mull of Kintyre happened this time! 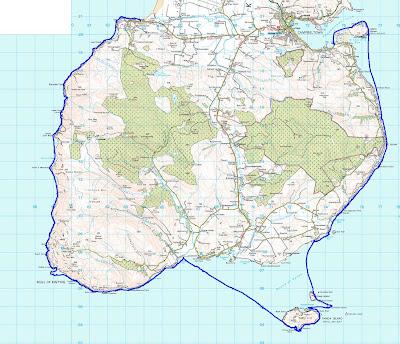 This weekend saw light winds forecast across the west of Scotland. The tides were right for a 62km paddle round the Mull of Kintyre, one of the most remote headlands in the UK. We aimed to leave Macrihanish at 0930 on Saturday 26th July, just as the south going flow started. We expected to arrive at the Mull of Kintyre (14.5km distant) at 1230 when the tide race would be at its maximum. A light wind is essential for such a plan as the tide race would be a maelstrom in strong winds and there would be no turning back! Last year we turned back because the forecast light winds turned into a force 5 easterly which would have meant wind against tide round the Mull.

The Mull of Kintyre  juts out into the North Channel which separates Scotland from Ireland. The tides are so strong and unusual that when the tide is in on the east side of the Kintyre it is out on the west side! You paddle round on sloping water! Careful tidal planning is required for such a trip and it is sensible to refer to the tidal direction rather than flood or ebb. Indeed the tide we caught started as an ebb on the west side of the peninsula and ended up as a flood on the east side of the peninsula! What a fun paddle.... in light winds! 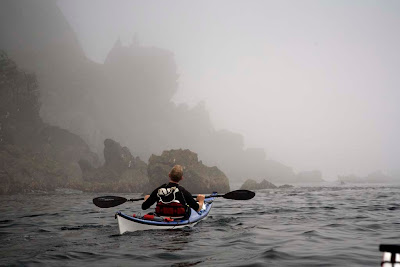 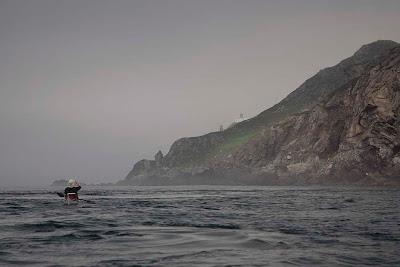 After rounding the Mull the fog began to lift so we paddled out into the race for a view back to the lighthouse. The light was established in 1788 by Thomas Smith assisted by his son in law, Robert Stevenson, the first of the Stevenson family of lighthouse engineers. It was rebuilt in 1830 and automated in 1996. The light flashes twice, white every 20 secs.