The heather on fire in an empty land. 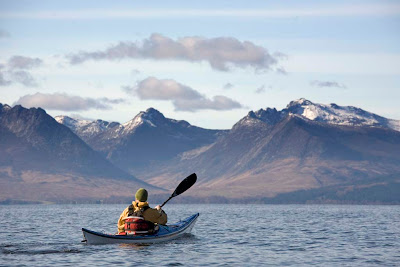 Leaving Garroch Head it was an 11km crossing to Glen Sannox at the north east end of Arran. During the crossing we had the ebb tide running to the SE out of the Sound of Bute and a wind that increased to force 4 from the NW. We had to use quite a high ferry angle to counteract the effects of wind and tide. 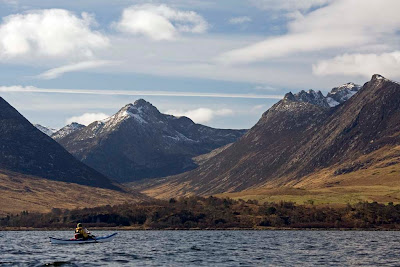 At last we approached the bay at the mouth of the glen. We felt dwarfed by the mountains of Cir Mhor and Caisteal Abhail with its serrated ridge, Ceum na Caillich (the old woman's step). Glen Sannox has been populated for thousands of years. There are standing stones and an Iron Age fort but the saddest signs of past habitation are the outlines of once fertile runrigs (small raised fields) and the stones of flattend cottages. 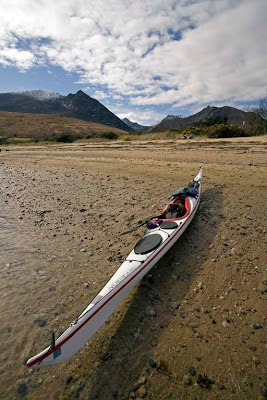 The Vikings called the great sweep of golden sand "Sand-vik" (sandy bay) which was corrupted to the present day Sannox. This was once the most populous part of Arran but in 1832 the Duke of Hamilton cleared the crofters off the land of the Glen. Half a century later, a poet, Mathilde Blind, visited Arran and wrote this:

I stood on the site of such a ruined village. All that remained of the once flourishing community was a solitary old Scotchwoman, who well remembered her banished countrymen. Her simple story had a thrilling pathos, told as it was on the melancholy slopes of the North Glen Sannox, looking across to the wild broken mountain ridges called "The Old Wife's Steps." Here, she said, and as far as one could see, had dwelt the Glen Sannox people, the largest population then collected in any one spot of the island, and evicted by the Duke of Hamilton in the year 1832. The lives of these crofters became an idyll in her mouth. She dwelt proudly on their patient labour, their simple joys, and the kind, helpful ways of them; and her brown eyes filled with tears as she recalled the day of their expulsion, when the people gathered from all parts of the island to see the last of the Glen Sannox folk ere they went on board the brig that was bound for New Brunswick, in Canada. "Ah, it was a sore day that," she sighed, "when the old people cast themselves down on the seashore and wept."

Mathilde Blind went on to write a poem about the Clearances called "The Heather on Fire".

From 1840 to 1862 the Duke ran a baryte (barium sulphate) mine in the glen. It reopened in 1919 and a wooden pier was built on the sands with a light railway connecting it to the mine. The mine closed in 1938 and the pier and the railway were removed in the late 1940s. You can still see the bases of the pier columns in the sands.

Posted by Douglas Wilcox at 6:07 pm