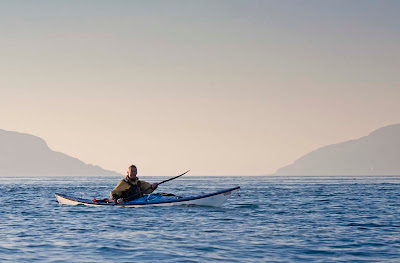 We finally broke out of the current that was flowing from the Dorus Mor relentlessly towards the gaping jaws of the Gulf of Corryvreckan beyond.

We were now heading north west with the rocky isle of Reisa Mhic Phaidean on our left. All day long, we had watched great skeins of barnacle geese flying north up the Sound of Jura from their wintering grounds on Islay.

They spend the summer on Spitzbergen, some 2700km away to the NNW. I do hope they were not fooled into an early departure by that glorious high pressure spell in February. They normally leave in April and the severe weather since mid February must have made a northward migration almost impossible.

Beyond the geese, you can see Kilmory Lodge on Scarba and the distant mountains of Mull.