What was once common and taken for granted. 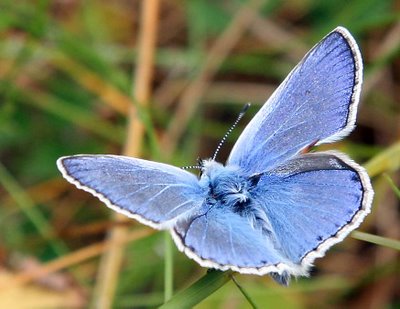 While on the machair at Uig, Isle of Lewis, I spotted lots of common blue butterflies. These were once a common sight on grasslands throughout the UK but intensive farming has greatly restricted their habitat and numbers. Thankfully the Lewis machair had remained unchanged for centuries prior to this July day. It was very windy and the grass it was perched on was waving about. This meant I could not drop the shutter speed enough to get really good depth of field for a crisp photo.

In the background, I heard the "croak croak" of the corncrake. This bird is another once common species which is just hanging on in the fringes of the country.

Sea kayaking takes us to special places. We have two responsibilities. First of all we should not harm these places and secondly we should do our best to ensure their future survival. It is encouraging to see local inhabitants developing businesses that exploit the tourism benefit of a pristine environment.
There are proposals to build two huge wind farms in Scotland. Both would be bigger than any other land wind farm in Europe. One is near where I live on the SE of Glasgow. The other is not far from Uig in Lewis. I am completely in favour of the one near Glasgow.

The Lewis one is very difficult with many pros and cons. Lewis is already self sufficient in electricity generated from hydro electricity so the power will need to be exported to the mainland. They plan a new grid to the central lowlands where the cities are but Scotland also exports electricity so this new power will need to be transmitted a long way to where it will be finally used. A lot of power will be lost through the cables. Jobs will be created during construction and crofters will be able to rent the land which otherwise generates little income. New roads and heavy construction will need to encroach on one of the last wildernesses in Europe.

In city offices we will be able to leave our computers on overnight.
Posted by Douglas Wilcox at 7:44 pm